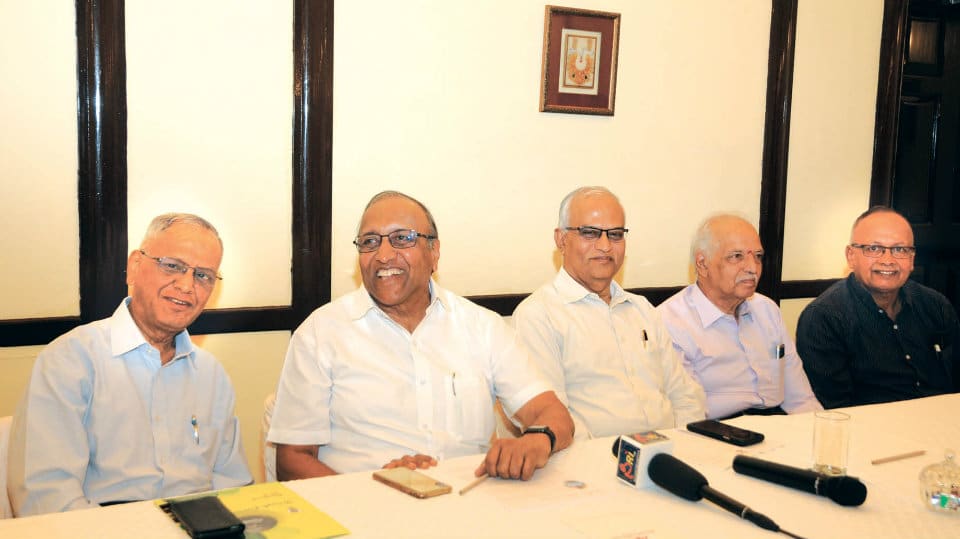 New campus to come up near Mysore Airport; D.A. Prasanna is Founding Chancellor

Mysuru: National Institute of Engineering (NIE), a premier educational institution in city, announced that the Karnataka Government has notified the NIE University Act 2019 enabling the institution to establish a Private State University, with headquarters in Mysuru.

Addressing a press conference at Hotel Metropole this morning, Srinath Batni, President of the NIE Society, said that a new campus is planned on a 50-acre land granted by Karnataka Industrial Area Development Board (KIADB) beyond Mysore Airport at Mandakalli near Adakanahalli and a Master Plan has been developed to have a swanky campus.

Initial infrastructure will be built at a cost of Rs.45 crore and the entire campus will be built at an estimated cost of Rs.175 crore. “Courses including Applied Science, Applied Arts, Humanities and Applied Management will be started at the new campus,” Batni, who was a Board Member of Infosys, said.

A Committee of Secretaries of the Government will be visiting in due course and the Committee will decide on the effective date of commencing the University.

“NIE University will be governed by an eminent Board of Governors and we have designated D.A. Prasanna as the Founding Chancellor of NIE University. He will assume charge after the Government approves the commencement of the University,” he added.

Prasanna is an alumnus of NIE and passed out with a first-class degree in Mechanical Engineering in 1968 from the University of Mysore. He then acquired an MBA from Institute of Management, Ahmadabad. During his 25 years with Wipro, he established Wipro GE Medical Systems which brought appropriate technologies to transform medical diagnostics in India. He was the Vice-Chairman of Wipro. Prasanna made significant contribution to Manipal University as Executive Chairman of Manipal Education and Medical Group. He is a successful entrepreneur who setup Manipal Acunova Ltd., the leading Indian Clinical Research Organisation.

Infosys Founder N.R. Narayana Murthy, a distinguished alumnus from the batch of electrical degree at NIE in 1967, said, “Prasanna is a distinguished NIE alumnus and he is a competent, value-based, dynamic, result-oriented and team-oriented professional. It was he who germinated the idea of NIE University in the minds of the Management Council Members when he joined the NIE Management Council a few years ago. Thanks to his vision, leadership, tenacity, hard work and commitment, that idea is about to become a reality.”

Prasanna said that NIE has been a pioneer, starting engineering education in India way back in 1946. “NIE has produced students like Narayana Murthy who put India on the Information Technology map of the world. NIE University has the opportunity to be a leader preparing students to solve the problems of a confident India in the twenty-first century. My endeavour will be to transform NIE University to become a sought-after Institution for students, researchers, faculty and employers in the country,” he added.

The NIE is a 73-year-old engineering educational institution in Karnataka. Founded in 1946, NIE is the second oldest engineering college after Visvesvaraya College of Engineering and it has produced several famous engineers who have contributed significantly to premier engineering institutions in India.

NIE became autonomous in 2007 and now has its own curriculum which is dynamically responsive to industry demands.