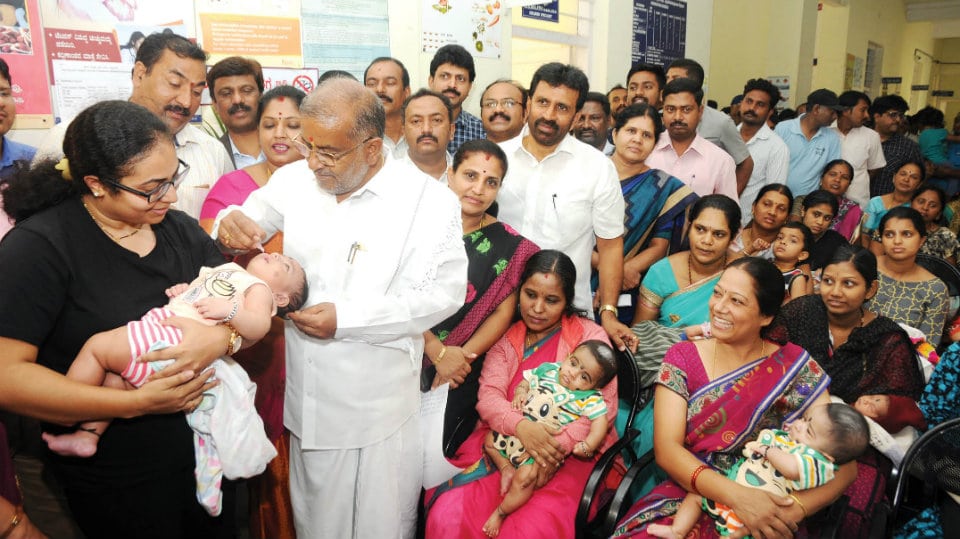 He was speaking after launching the Pulse Polio Immunisation Drive by administering polio drops to a child at the programme organised jointly by the District Administration, Department of Health and Family  Welfare, Women and Child Welfare Department at Government Maternity Hospital in Jayalakshmipuram here this morning. He asked volunteers to administer the polio vaccines without any miss. The Government has also launched ‘Mission Indradhanush’ to achieve cent percent coverage along with the Universal Immunisation Programme.

Appreciating the efforts of volunteers, frontline workers and Health Officials for tireless work for keeping the country polio-free, he said this drive has also helped in bringing down infant mortality.

Speaking on the same occasion, District Health Officer Dr. B. Basavaraju said that the district has made all preparations to administer polio drops to the identified 2,49,994 children below five years, across city and district.

He said that the polio drops will be administered to children for the next three days in all polling booths from 8 am to 6 pm. A total of 1,628 polio booths, including 23 transit booths and one mobile team, have been set up for the purpose.

Special booths have been opened at all tourist places including Chamundi Hill, Mysore Palace, Zoo and other tourist spots. Apart from taking the help of Anganwadi activists, ASHA workers, the Dept. has deployed 6,416 volunteers, 326 supervisors. They will also go door-to-door on all the three days.

Instructions have been given to them to give special interest to cover children living in slums, tribal hamlets, migrating population such as nomads, brick-kiln workers, construction site workers, sugarcane cutter families and those in hilly regions who are difficult to reach.