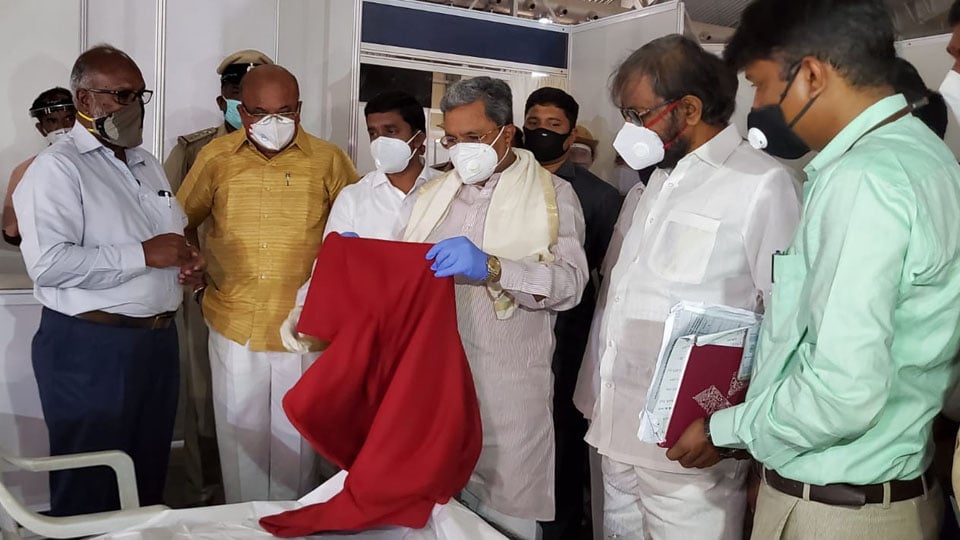 “BIEC Centre is too little, too late. The delay in setting up of the COVID-19 Centre in BIEC, in spite of our party’s suggestion in March, exposes the inefficiency of the Yediyurappa Government. The Centre is ill-planned with inadequate sanitation. The CM is averse to suggestions from the Opposition,” he said.

“This Centre, to be operational from Friday, will require at least 2,000 doctors, paramedical staff and ward boys. None were present there today,” he told reporters after visiting the facility. Siddharamaiah, Leader of the Opposition in the Assembly, said he found facilities like water supply, drainage and toilets inadequate.  His visit comes a day after KPCC Chief D.K. Shivakumar threatened to protest if beds and mattresses from the COVID-19 Care Centre are sent to Government Hostels after the pandemic ends.

The former CM alleged that the problems of contractors supplying bedding material to the COVID Care Centre had not yet been resolved. The Government had earlier said it would procure them on rent at Rs. 800 per bedding but later decided to purchase them when it received flak from various quarters, he said.

Siddharamaiah reiterated that there was corruption in purchasing equipment to fight COVID-19, though Medical Education Minister Dr. K. Sudhakar had denied the charges, and added that the Congress would submit “evidence” on Thursday.

“Tamil Nadu purchased each ventilator for Rs. 4.78 lakh, whereas Karnataka purchased them for Rs. 15 lakh – Rs. 18 lakh. What else is it other than corruption?” he asked. Siddharamaiah said he has sought details about five to six Departments from the Chief Secretary.