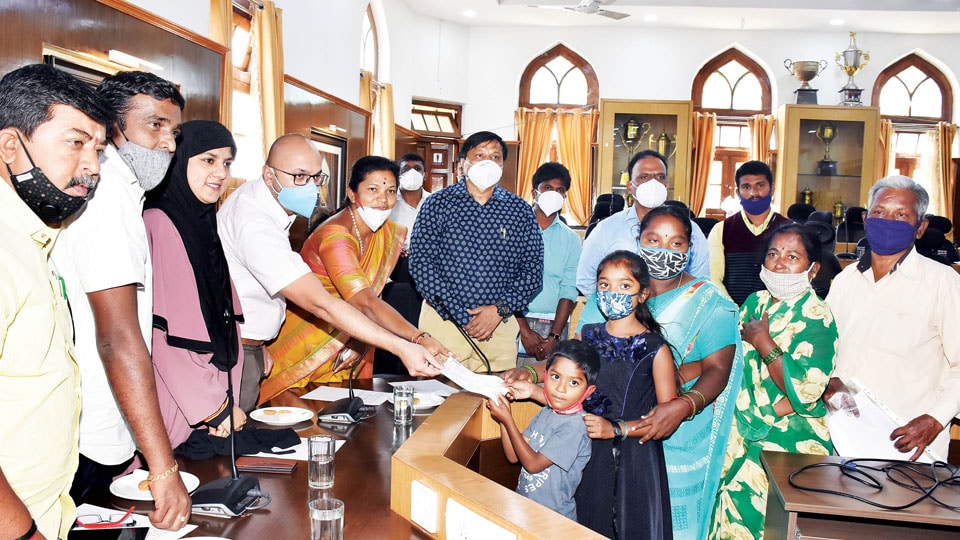 Mysore/Mysuru: Months after five Pourakarmikas died of the deadly COVID-19 pandemic, the Mysuru City Corporation (MCC) on Monday distributed Rs. 30 lakh each to the families of two of the deceased as a relief, at a programme organised at the MCC Main Office on Sayyaji Rao Road here.

Mayor Tasneem, Deputy Mayor C. Sridhar and MCC Commissioner Gurudatta Hegde handed over the Rs. 30 lakh cheque to the families of outsourced Pourakarmika woman Obamma (53), a resident of Mandi Mohalla and Shashikumar (40), a MCC garbage collecting auto driver of Gorur, who died of COVID a few months ago.

Speaking on the occasion, MCC Commissioner Guruatta Hegde said that a total of 121 staff of the MCC, including Pourakarmikas, were infected with the deadly pandemic, out of which five died. Now two of them — Obamma and Shashikumar — have been distributed relief of Rs. 30 lakh, while three others have not been distributed relief  due to want of necessary documents. The families of the  three deceased staff — Mahadeva alias Dasharatha, S.J. Krishnamma and V. Bannari — are yet to submit the necessary documents, he said and added that the MCC Council will pass a resolution on providing relief to the families of the three deceased, once the sought records are submitted.

Lakshmidevi, wife of the deceased garbage auto driver Shashikumar, said that she will utilise Rs. 10 lakh for the education of her children Manyashri and Tashwin. She further said that she has appealed the MCC to provide a job for her on compassionate grounds.

Lakshman, husband of deceased contract Pourakarmika woman Obamma, said that Obamma who had served the MCC for 15 years died of the deadly virus on July 23. Noting that Rs. 30 lakh compensation paid by the MCC is just about enough for maintenance of the family, he appealed the MCC to provide a job for their son Mahesh on compassionate grounds.

Reiterating the charge that officials had breached protocol, she said that she would write to the Higher authorities in the Government seeking to take action against errant officials, who failed to follow the protocol.

MCC Health Officers Dr. Nagaraj and Dr. Jayanth, Corporators J. Gopi and Prema Shankaregowda and others were present during the programme.