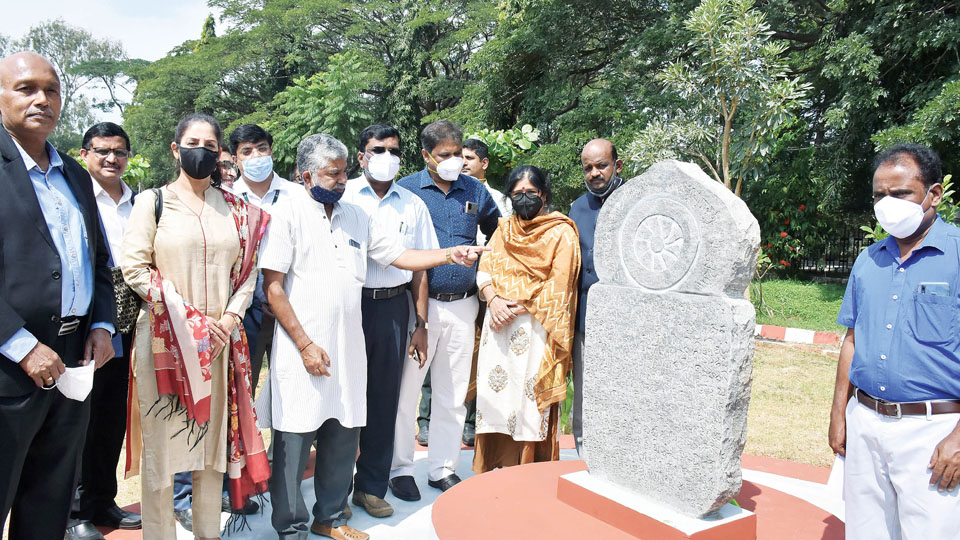 Speaking at the inaugural function of various development works in Kalamandira taken up  under BNPM’s Corporate Social Responsibility (CSR) fund here yesterday, Vishwanathan said the sprawling Kalamandira premises has been given a facelift by the authorities concerned in three phases. The Mysuru Unit of BNPM, a biggest manufacturer of note paper in the country, had released CSR funds in three instalments.

Appreciating H. Chennappa, Assistant Director, Kannada and Culture, for making good use of fund, he wanted him to upkeep the existing fountain and the garden in the premises.

Additional Deputy Commissioner B.S. Manjunathswamy said CSR fund is usually utilised in education-related activities but the BNPM has given fund for the cultural field too. Kalamandira has been an abode of cultural activities throughout the year. But now it wears a deserted look in last eight months due to COVID. BNPM can consider extending financial assistance in the coming years, he noted.

Addanda C. Cariappa, Director, Rangayana, said the State Government has cut grants to the theatre repertory due to Corona and even cultural activities too have stopped since last eight months. The BNPM officials may also consider Rangayana for CSR fund to take up cultural activities.

Thanking BNPM, Chennappa said of the total Rs.1.40 crore promised, Rs. 20 lakh was given during 2017-18, Rs.40 lakh in 2018-19 and Rs.80 lakh in 2019-2020. The BNPM had increased the grant year by year and wanted it to continue the same in the coming years. Out of Rs.80 lakh, the Department had used the grant on improvement of interior and exterior of Kalamandira, toilets, digital system, CCTV, parking, rain water harvesting and the much-needed rehearsal room.

He said now they have sought for fourth phase of fund to improve digital lighting system and upkeep of the garden. Being a biggest auditorium, Kalamandira has staff numbering 25 and Rs.2,000 is collected to allow staging each play but it was not sufficient even to pay the electricity bill. Another round of financial assistance will help to bring in more changes in Kalamandira, he said.

We have put on display a replica of ‘Halmidi inscription’,  the first Kannada inscription found in Belur, Hassan district. School children will get an idea about the first inscription in Kannada. Since it is not possible to read what’s there in the inscription, the same has been written in Kannada and placed in Kalamandira garden.”  — H. Chennappa, Assistant Director, Kannada  and Culture

Rangayana also, like Department of Kannada and Culture, belongs to Government of Karnataka. It was started by B.V.Karanth. The BNPM must extend financial assistance to Bharatiya Ranga Shikshana Kendra. Like Kalamandira, Rangayana too has Bhoomigeeta, Sriranga, Vanaranga and a theatre training school. There will be one or other activity daily here.” — Addanda C. Cariappa, Director, Rangayana