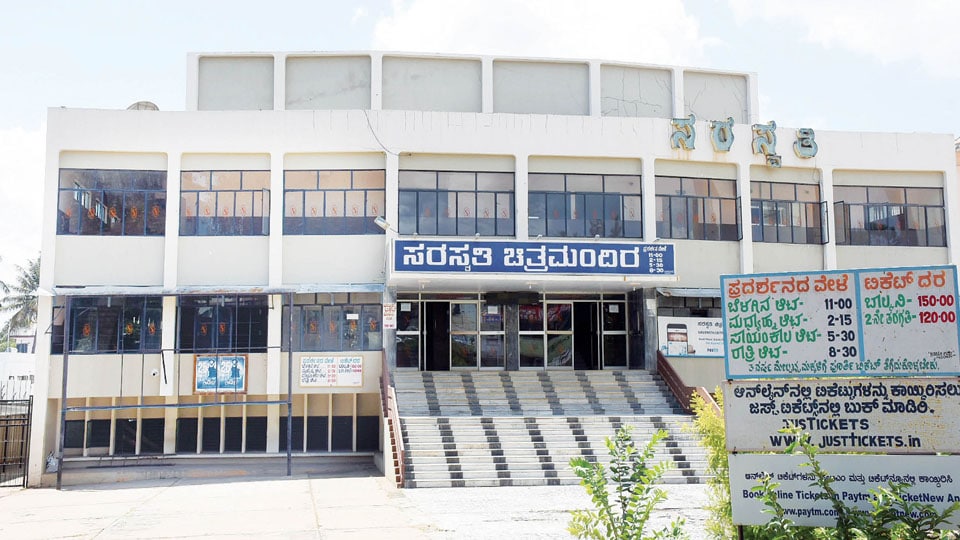 COVID effect: Saraswathi Theatre too joins pages of history after entertaining movie buffs for over 30 years

Mysore/Mysuru: Saraswathi Theatre in Saraswathipuram has downed its screen permanently after entertaining movie buffs for over 30 years. “There were no shows since one-and-a-half years due to COVID pandemic and no new movies released. How can I run the theatre by screening old films. It is a loss and cannot maintain the expenses, so I have decided not to run the theatre anymore,” said an emotional C.G. Narayan, Proprietor of the Theatre.

Reacting to the closure of Saraswathi Theatre, M.R. Rajaram, Vice-President, Karnataka Film Exhibitors’ Federation, said it is very sad to see theatres in Mysuru closing one by one. Huge taxation and no revenue was forcing owners to close the theatres, he added.

Pointing out that the taxes on theatres were 300 percent more in city than Bengaluru, Rajaram said the taxes were 250 percent more compared to any Corporations in the State. Three more single screen theatres are on the verge of shutting down permanently in city.

Since the past one-and-a-half years, three single screen theatres in city — Shree Nagaraja (Shree Talkies), Shanthala and Lakshmi — have closed down and now, it is Saraswathi Theatre. In all, Saraswathi Theatre has joined the list of theatres including Lakshmi Theatre, Opera Talkies, Ranjit Theatre, Vidyaranya, Ganesha, Shalimar, Srinivasa, Rathna, Shanthala and Shree Nagaraja, which have closed down.

With the closing down of Saraswathi Theatre, there are only seven single screen theatres in city now.

ONE COMMENT ON THIS POST To “COVID effect: Saraswathi Theatre too joins pages of history after entertaining movie buffs for over 30 years”