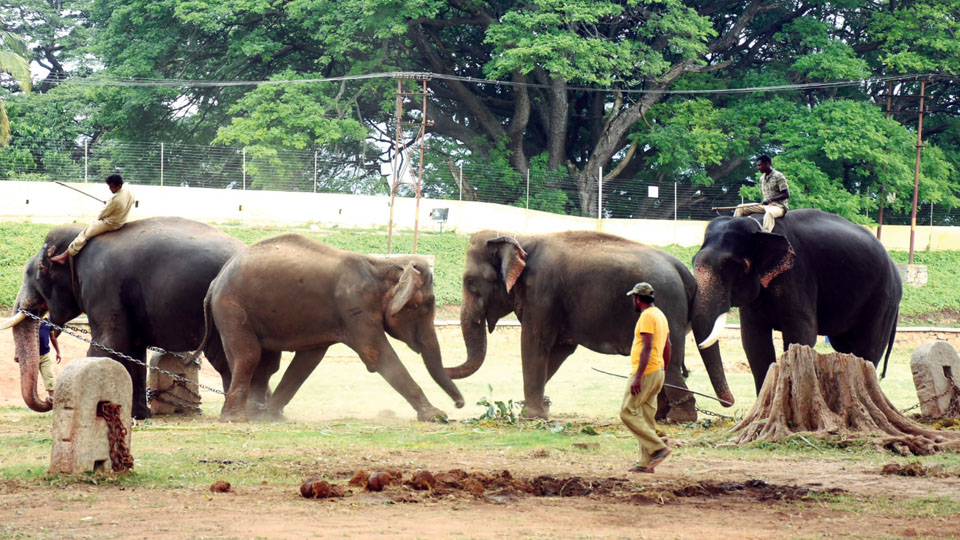 Mysore/Mysuru: There are many types of elephants: polite, naughty, and nice just like humans. They have their own set of emotions and elephants are highly intelligent beings with a good memory. Like humans, they crave attention and companionship and leave no opportunity to display their naughtiness.

Elephant naughtiness was on full display yesterday inside the Mysore Palace last evening where all the eight Dasara elephants are stationed along with six female elephants that have been living inside the Palace fortress since decades after being rescued from Gemini Circus.

Rajeshwari, one of the female circus elephants, unchained itself and showed its naughtiness to other elephants by creating ruckus. This also caused tense moments among mahouts and other handlers as they struggled to control Rajeshwari. Finally, they were able to calm her down with the help of mighty Dasara tuskers.

After the hectic rehearsals with sandbags, the exhausted elephants and their handlers were taking a break inside the Palace premises when Rajeshwari alias Raji unchained itself and entered the group of other elephants. Seemingly happy, she began throwing mud on its back and was vigorously shaking its head. It ran around the premises and rubbed itself with her companions.

Knowing that the heavy chains would obstruct her free movement, Raji intelligently carried one part of the chain in its mouth and held the other end with its trunk. Seeing her moving freely, other mahouts rushed to calm her. They began coaxing her with a stack of green grass but Raji took along the green grass with her strong trunks and ran around, enjoying the company of the mighty tuskers. Many commands and threats by the mahout did not deter her and she continued her mischief.

It looked as if she was craving for a male companion. Later, mahouts of Abhimanyu and Dhananjaya took their elephants near Rajeshwari and struggled for over 20 minutes to bring her under control. Abhimanyu is known for his many skills and even he could not control Raji that went berserk.

Seeing Abhimanyu and sensing trouble, Raji ran away from the place and in the process dropped the heavy chains from its trunk. Later, Abhimanyu stomped on one end of the chain while the other was caught by Dhananjaya. With two ends of the chain under the control of Abhimanyu and Dhananjaya, Raji had no chance of escaping and it was stuck. However, it made many attempts to break free.

Finally, after more than one hour, Raji’s mahout coaxed her to bend and sit on its folded legs and later lie down. He continuously patted her to calm her down. Finally, Raji relented and allowed the mahout to tie her down. She was later fed with food and grass.

Learning about the incident, member of Mysore royal family Pramoda Devi Wadiyar under whose supervision the six female elephants are taken care of, sent a word to the mahouts not to beat or punish Raji.

Later, Pramoda Devi was informed that the elephant had calmed down.