Home » News » Congress will defeat BJP in next elections: Sudarshan 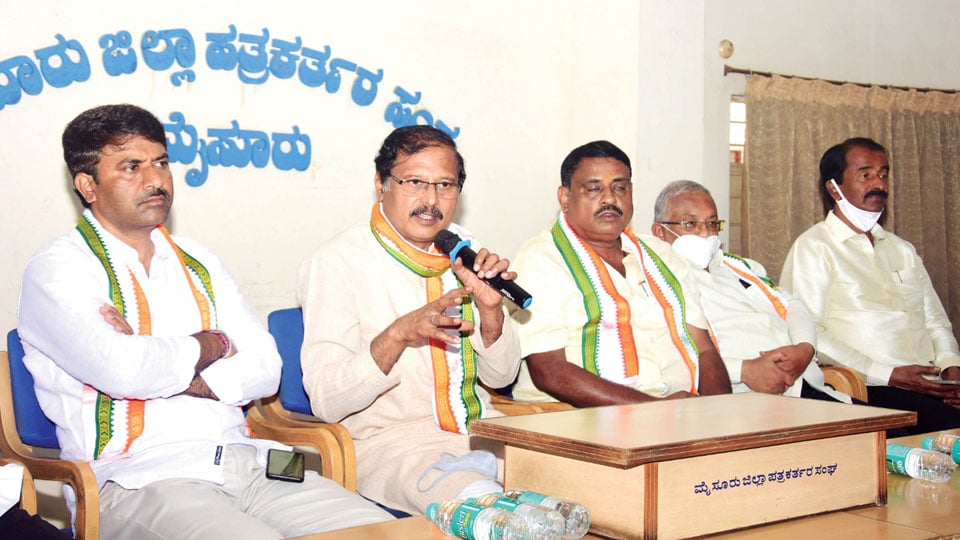 Congress will defeat BJP in next elections: Sudarshan

Mysore/Mysuru: The BJP-led NDA Government at the Centre and the State Government had failed to fulfil the aspirations of the people and it came to power by giving false assurances, said former Chairman of State Legislative Council and Congress leader V.R. Sudarshan.

Addressing reporters at Pathrakartara Bhavan in city this morning, the Congress leader said that both the Governments had created an atmosphere of hatred and anxiety and had failed to fulfil any of their promises. He exuded confidence that the Congress will be able to defeat the BJP in the next elections.

The Congress must be prepared for the elections in Karnataka that might be announced any moment as the infighting within the BJP has reached its peak and soon, the party will declare elections unable to run the Government, he claimed.

The Congress is actively strengthening Booth-level party workers to effectively highlight the failures of the BJP Government, he added.

Efforts will be made to spread the word about BJP’s ‘failure’ and the Congress’ ‘achievement for 70 years’ to each house in Karnataka, he added.

“Our party interacts with various sections of people and deals with issues on the ground. We have delivered on promises. The NDA Government’s insensitivity was there for everyone to see when the farmer’s agitation was at its peak in New Delhi. The Government did nothing to help farmers in distress and did not have the will to save them from bankruptcy,” he said.

“The BJP is trying to divert the attention of people, particularly the youth, with emotional issues. The culture of Congress was that of inclusive growth and that of strengthening the democracy not of divisive politics. The BJP had utterly failed in creating jobs for the unemployed youth of the country, and to cover up its failure, it was trying to infuse fallacies in the minds of the youth,” he charged.