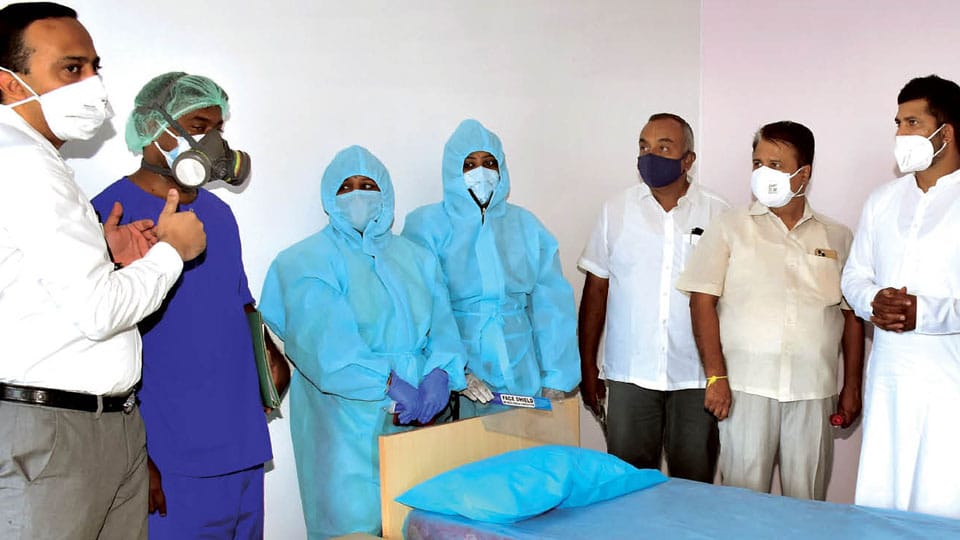 The Centre, headed by Physician Dr. M.R. Aiyappa, will have three other doctors, 6 staff nurses and 6 house-keeping staff.

Speaking on the occasion, Pratap Simha said that the International Youth Hostel – Mysuru has been converted into a 64-bed COVID Isolation Care Centre in association with city’s Spandana Hospital and Brindavan Hospital.

Noting that basic medication and Physiotherapy will be provided for COVID patients with mild symptoms, he said that 8 rooms and 16 dormitories at the Hostel have been used for setting up the beds and added  that the Centre is meant for those who do not have or cannot afford home isolation. Stating that supplementary oxygen will be stored at this Centre to meet   emergency requirements, he thanked MUDA for its support in setting up the Centre. The MP appealed the people not to be hesitant for getting tested, treated and vaccinated for the deadly virus, which is causing havoc across the globe.

Referring to the death of 24 patients in the last 24 hours allegedly due to shortage of oxygen cylinders at Chamarajanagar District Hospital, Pratap Simha said that the deaths were most unfortunate.

Rebutting allegations that Mysuru District Administration  had blocked oxygen supplies to Chamarajanagar, Simha said that Chamarajanagar was once part of Mysuru district and that he spoke to Chamarajanagar Deputy Commissioner yesterday morning after coming to know  from media about severe oxygen shortage in that district.

READ ALSO  COVID test must for those taking part in 'Jumboo Savari': Minister

Later, he (Simha) took great pains to dispatch a total of 145 cylinders supplied by Mysuru’s Southern Gas Private Ltd., in three batches (15+60+70 cylinders) to Chamarajanagar yesterday itself, he maintained.

But unfortunately, the situation seemed to have gone out of control in Chamarajanagar, MP Pratap Simha said adding that he was deeply pained to learn this morning that 24 critical patients allegedly died for want of oxygen.

Blaming the Chamarajanagar District Administration for negligence in the procurement of oxygen cylinders, Simha said that Mysuru district needs 44 MLT of oxygen and at present the district is getting supplies of only 22 MLT.

Pointing out that there are over 300 COVID patients undergoing treatment at K.R. Hospital, he said that the life of these patients too would have come under severe threat had he not taken measures for oxygen storage and supplies.

Replying to allegations that Mysuru DC had blocked oxygen supplies to other districts, Simha said that Padaki Air Products and Southern Gas Private Limited are the only two medical oxygen manufacturers in the city and the Deputy Commissioner of the district has no powers to allocate oxygen supplies.

Asserting that only the Government has the power to allocate oxygen supplies to districts, the MP reiterated that no DC has any power to block Government allocation of oxygen to whichever district.

Later, MP Pratap Simha visited oxygen manufacturers of the city —  Padaki Air Products and Southern Gas Private Limited, both in Hebbal Industrial Area and inspected the production, storage and distribution processes in the two units. He appealed the manufacturers to scale up production and supply oxygen as per the needs of   the district.