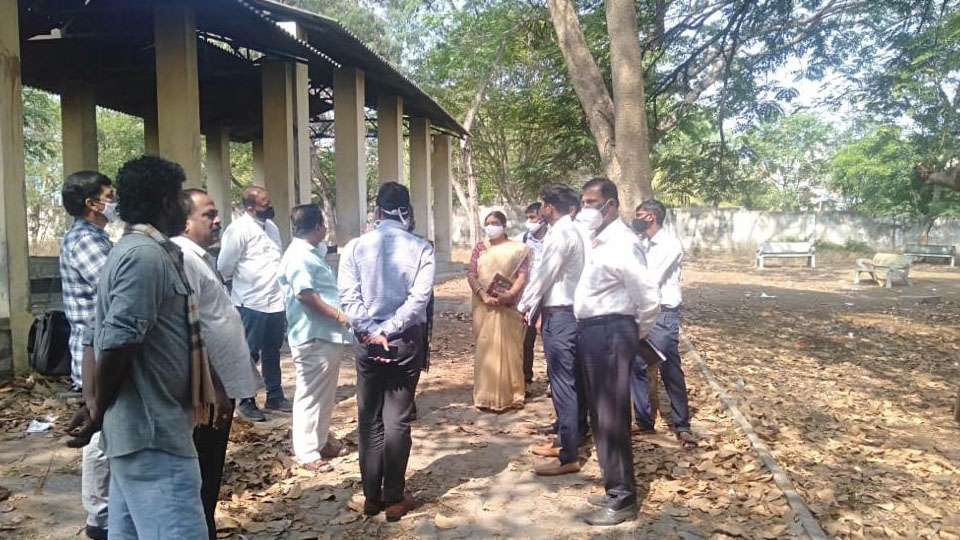 Mysore/Mysuru: Long queues of dead bodies in ambulances and hearses outside major crematoriums are becoming a familiar scene in bigger cities like Bengaluru as the State Capital is reporting increasing number of COVID deaths. Though the situation is not as grim in Mysuru, unabated death of people here has forced the authorities of Mysuru City Corporation (MCC) to look out for new crematoriums and burial grounds.

With 150 deaths in the last three weeks, the MCC is searching for new spaces to cremate or bury victims. Not ready to come under severe criticism like the Bruhat

Bengaluru Mahanagara Palike (BBMP) for mishandling cremations and burials, MCC is frantically searching for bigger areas for the last rites and also well-equipping the existing ones in case the death graph increases.

To check crowding at Mukthidhama in Vijayanagar, the new electric crematorium at Jayanagar was opened two to three days back to accommodate more bodies. The gas crematorium at Harishchandra Ghat at the foot of Chamundi Hill is also functional to handle more number of bodies. Besides, the Jodi Thenginamara Road burial ground has been thoroughly cleaned and readied

According to MCC Health Officer Dr. D.G. Nagaraj as the burial ground near Tipu Circle lacks space, the dead bodies are being taken to the burial ground in Gowrishankarnagar at the foot of Chamundi Hill for the last rites.

Meanwhile, a 5.9-acre land has been identified at Rammanahalli. Once the existing burial ground becomes full, dead bodies will be shifted to Rammanahalli Burial Ground for the last rites. Tahsildar K.R. Rakshith also visited the spot to see the preparations.

It takes one-and-a-half hours for a body to burn completely in gas and electric burners, but it takes three to four hours for the body to burn using firewood.

To check fleecing by ambulance drivers, the district administration has stationed four vehicles exclusively for shifting the bodies of COVID victims to crematoriums or burial grounds. These vehicles are available at the Office of the District Health Officer (DHO), Nazarbad and at MCC premises. Even if death occurs in private hospitals, the DHO Office or the COVID Control Room must be informed to arrange hearse to shift the body.

To monitor this, the Deputy Commissioner has appointed Dr. Mohammed Shiraz Ahmed, Dr. Anil Christy and Dr. D.G. Nagaraj as Nodal Officers to supervise the last rites. These Officers are working in tandem to help families at the    time of distress.

Dr. Nagaraj told Star of Mysore that several measures have been taken to stop fleecing of bereaved family members. “Swindling them in the name of providing vehicles for shifting the dead bodies is inhuman. The District Administration has worked out a strategy to help people who are in need. Ayub Ahmed, who had performed the last rites of several COVID victims last year at a time when relatives were not ready to come near the dead bodies, is helping the administration in this regard,” he said.

He said a few days ago, a person in Saraswathipuram died of COVID. “The person was staying in the first floor and he died. Sadly, his neighbours did not come forward to shift the body for cremation. Family members can have the last glimpse of their near and dear ones by wearing PPE kit,s but many leave everything on officers and go home,”   Dr. Nagaraj rued.

READ ALSO  Night curfew from 9 pm to 6 am

Recently, a Taluk Health Officer was booked for shifting the body of a COVID victim in a private ambulance, he added.