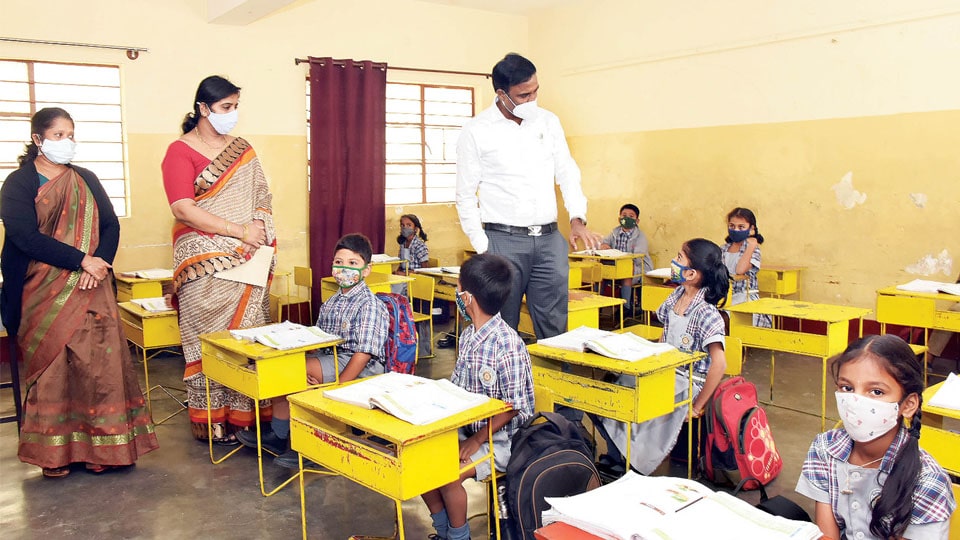 The team of health officials inspected NPS at Vijayanagar and Rotary West School at Saraswathipuram. They not only inspected the institutions to check if Government guidelines are being followed but also interacted with students and teachers.

The DHO told SOM that during inspection, they sought data pertaining to number of students affected with the virus and those with symptoms. Dr. Prasad said that if the infection rate is high in schools, that particular school would be closed for a few days as per Government guidelines.

The team explained to the school authorities about the precautions to be taken and also explained how to convince the parents to send their children to school by taking them into confidence. It may be recalled as daily COVID-19 cases began to increase, Deputy Commissioner Dr. Bagadi Gautham had declared closure of schools in Mysuru city and taluk from Jan. 12 as a precautionary measure. Physical classes from LKG to Class X including residential, Government, aided and unaided remained suspended.

But a day after Primary and Secondary Education Minister B.C. Nagesh announced that Schools (classes 1 to 10) be allowed to open across the State, barring Bengaluru, DC Dr. Bagadi Gautham on Jan. 22 ordered re-opening of Schools from Jan. 24, by strictly adhering to COVID appropriate behaviour.

On Jan. 26, District Minister S.T. Somashekar, after taking part in the Republic Day celebrations, held a meeting with officials of the District Administration and the Health Department at Government Guest House and asked them to take steps to distribute home isolation kits.

Speaking to the media later, the District Minister said that though the number of COVID-19 positive cases were increasing,  the number of affected persons being hospitalised or admitted to COVID Care Centres (CCCs) was very less, which is a good sign.

Pointing out that the number of affected persons opting for home isolation was more, the Minister said that this would decrease the pressure at hospitals. He has instructed the officials concerned to see that home isolation kits reach Police personnel, teachers, students, health workers and others, who are affected.

Stating that the number of daily COVID positive cases may reach 1,500 to 2,000 in the coming 10 days, Somashekar said that the CCCs were ready and 6,000 COVID tests were being conducted daily. Only those with symptoms and primary contacts of those who had tested positive were being tested, he said.