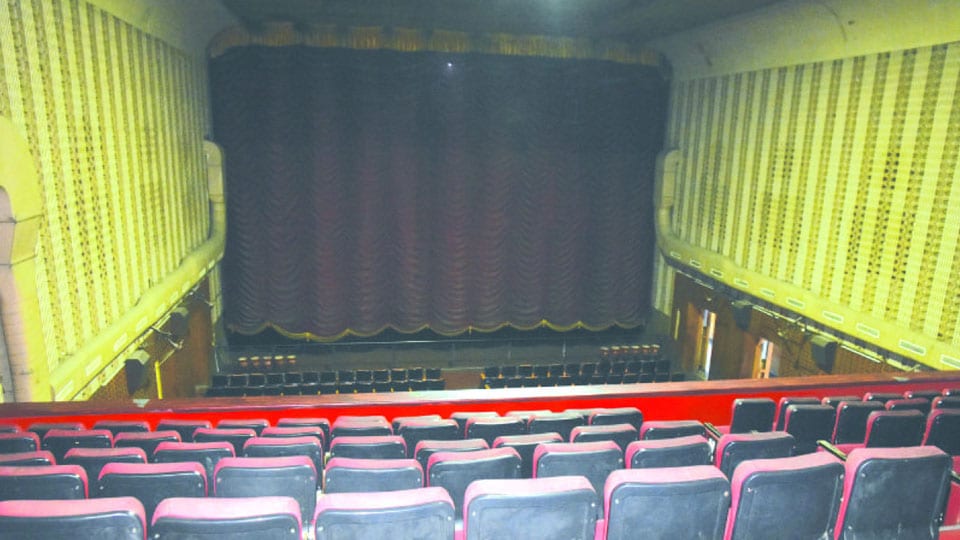 Mysore/Mysuru: The silver screen which went blank with the announcement of COVID-19 lockdown two months ago has continued to remain under the darkness of the deadly pandemic, which is creating havoc across the globe.

More than 500 theatres and cinema halls in the State that were shut two months ago, have failed to re-open since then due to the continuation of lockdown.

With theatres closed since March, the owners are a worried lot as revenue earnings have stopped. Also, the shutting down has cast a dark shadow on the fate of hundreds of theatre staff, parking contractors and their employees, food sellers, cool drink vendors and so on.

Federation of Karnataka Film Exhibitors Vice-President M.R. Rajaram, who owns a theatre in city, said that the theatre owners have been remitting ESI and other statutory benefits that are due to the staff even though theatres are shut. Also they have been paying power bills, property tax and all other taxes but the Government seems to have turned a blind eye to the problems of theatre owners as repeated pleas on deferment of taxes and other key demands remain unaddressed. Urging the Union and State Governments to exempt payment of power bills, property tax, licence fee and other taxes and cess in the interest of the film industry, he expressed disappointment that the Government has tended to ignore theatres, which have been providing jobs to scores of people directly or indirectly.

Pointing out that theatres and cinema halls are registered under the Shops and Commercial Establishment Act, Rajaram said that in reality, theatre owners are clubbed with the Film Industry and asked to pay all statutory benefits to workers. But when it comes to payment of property tax, the Government taxes them under commercial establishments classification, which is nothing but unfair. The Government should clarify on this contradiction and come to the rescue of theatre owners by addressing the issues raised by them.

Prasad, Proprietor of Sree Nagaraja theatre in Mandi Mohalla, maintained that theatre owners have paid salary to employees for March and April despite all the difficulties. “We have stopped screening of films since Mar.14 but yet we are receiving huge amount of power bills. Theatres are one among the top tax-payers to the Government and as such it must not ignore our plight when theatres have been shut and no money to pay for our employees. Also it is unfair to ask us to pay all taxes when we are in dire straits,” he noted.