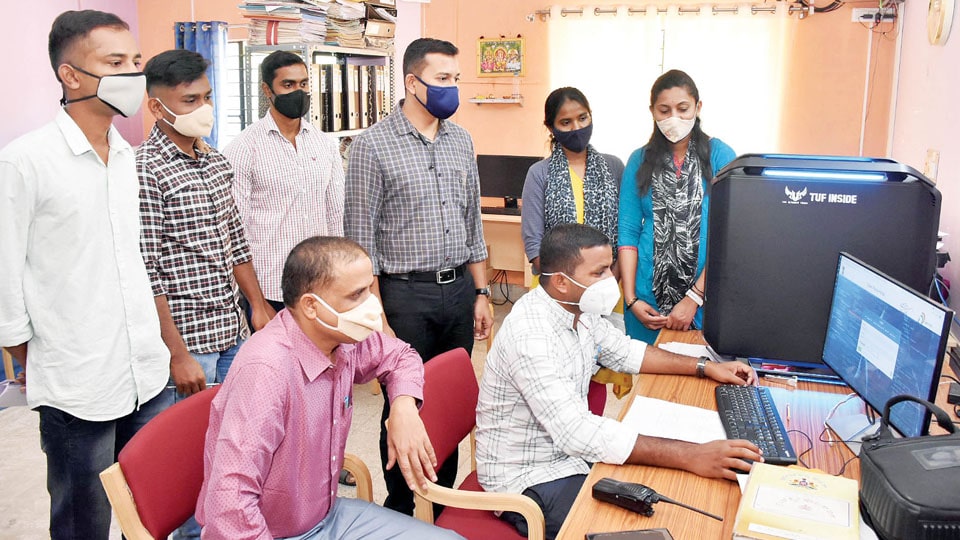 Cybercrime surges in city amidst lockdown

2,150 cases reported since the last one-and-a-half-years

Mysore/Mysuru: Cybercrime in the city has surged amidst Coronavirus lockdown and a closer examination in the jump in cybercrime reveals that criminals have proven effective at exploiting the ongoing crisis.

Since the last one-and-a-half-years, 2,150 cybercrime cases have been reported in Mysuru city alone and complaints have been filed. In the year 2020, 1,300 cases have been filed and this year, till date, 850 online fraud complaints have been registered. Data reveals that over 40 percent of the cases have been settled. Spike in cybercrimes and attacks has targeted private citizens’ wallets and personal data given the sharp increase in the percentage of the professional workforce remotely working as a result of lockdown. This despite the fact that the Police emphasising that one should not share their personal information or credentials with unknown people out of some temptation or for monetary benefits.

Then there were people selling sanitisers, PPE kits and food on fake websites. Some hackers also gained access to bank accounts with KYC platforms. Also the QR code cheating through online resellers became rampant, said Police. Details of credit cards and debit cards are somehow extracted from the gullible and the bank balance is polished off, including life’s savings and fixed deposits.

A majority of the complaints were booked regarding financial frauds committed through various social media platforms including the most popular ones like WhatsApp and Facebook. Rewards are announced in the name of reputed companies and the people are asked to click particular links.

Entices like discount sales of automobiles, shoes, watches and also oxygen concentrators from multinational companies are published where persons are asked to click a particular link that leads to the fraud websites that look like the original company or bank websites. New ways and means are adopted to fool people.

Reimbursement of fake reward points or cashbacks of e-commerce giants, SOS messages for urgent cash through fake hacked Facebook accounts, customer care number manipulation, frauds in the guise of refund of train and airline tickets and other online payments are some of the ways criminals have adopted to dupe people, G. Shekhar, Cyber Crime Police Inspector, told Star of Mysore.

Shockingly, apart from hacking, identity theft and data theft, complaints have also been filed against online harassment, cases of extortion by morphing videos and photos of people, especially related to sexual conduct. Videos are shot online of people in a compromising position and later they are blackmailed for money, he added.

“There are cyber criminals promising certain online items or some of them influence customers to make certain online transactions. Only if there is no delivery happening later, people realise that they are being defrauded and by the time, damage is done. Also, fake profiles of Defence personnel are created and household expensive goods are offered at dirt-cheap rates as the Defence person has to move out of the city to join his family due to COVID,” Shekhar added.

He attributed the spike in cybercrimes during the lockdown to the increase in online shopping as markets stayed shut. Many bogus websites were developed by fraudsters to take advantage of people who had increased their use of digital platforms for shopping, he explained.

Many of the times victims don’t report the crime as it happens. Criminals are attacking people with UPI frauds now instead of asking for your credit card and debit card details and the CVV number. Like in the medical field, here too the principle of ‘Golden Hour’ is important. If you report the crime instantly, we can block these accounts and there are high chances of getting your money back. The more you delay, the likelihood of getting your money decreases. Ideally, the complaint must be filed within 45 minutes of the crime.” – G. Shekhar, Cybercrime Police Inspector