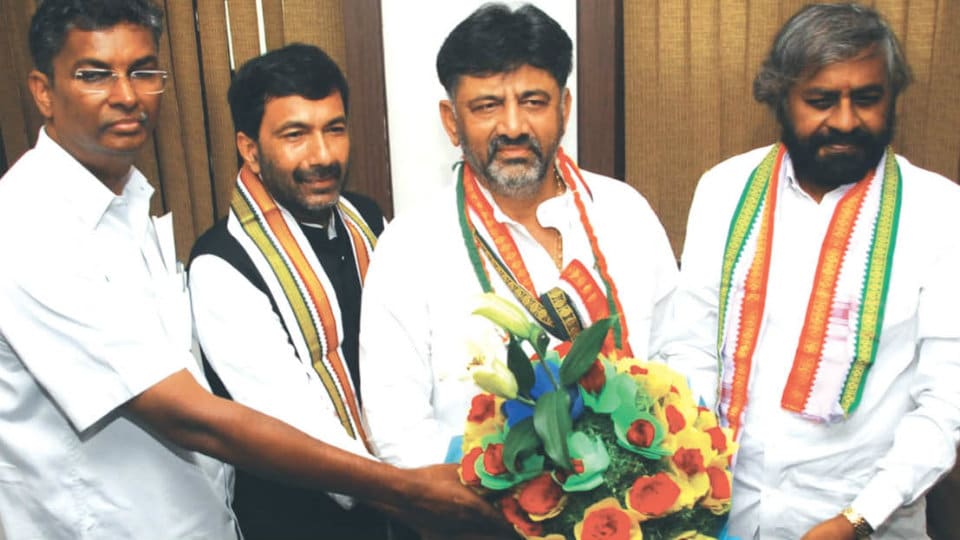 Bengaluru: Five days after he was named as the KPCC (Karnataka Pradesh Congress Committee) President by the Congress High Command, senior party leader and former Minister D.K. Shivakumar  (DKS) visited the Congress Bhavan near Ananda Rao Circle in the heart of the State capital this morning, to the cheers of hundreds of his supporters.

Soon after entering the Congress Bhavan, Shivakumar, also a Congress MLA from Kanakapura, garlanded the statue of Mahatma Gandhi, before entering the Bhavan building, where he was warmly received by the three Working Presidents — Satish Jarkiholi, Eshwar Khandre and Saleem Ahmed. While Eshwar Khandre was appointed as the KPCC Working President over a year ago, Saleem Ahmed and Satish Jarkiholi were appointed recently when D.K. Shivakumar was announced the President.

Soon after his appointment as the KPCC President, Shivakumar, who is known as the ‘Trouble Shooter’ in Congress circles, has been visiting party stalwarts in the past couple of days, who included senior leader and former Union Minister Mallikarjun Kharge, CLP and Opposition Leader Siddharamaiah and outgoing KPCC President Dinesh Gundurao.

Meanwhile, it is learnt that Shivakumar will take over as the KPCC President in the first week of April, in the presence of thousands of party workers.