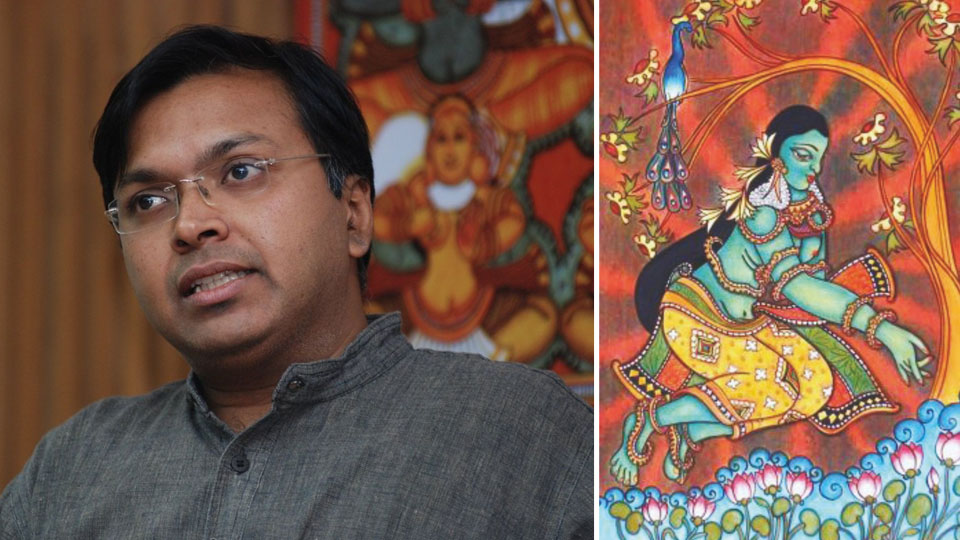 The word ‘Apsara’ is derived from the root ‘apsa’ which means water. Apsaras were nymphs who slipped away from the grasp of man, like water from a clenched fist. They were sent by the Devas to beguile and seduce Tapasvins, ascetics who sought to churn spiritual fire (tapa). The point of the seduction was to entrap the ascetics in the material world. Menaka was one such Apsara who seduced Kaushika, a king who was determined to become a sage, liberated from all things material.

Then there is Mohini, the enchanting female form of Vishnu. In appearance, she is just like an Apsara, beguiling and seductive. She enchants even Shiva, the greatest of Tapasvins. But her agenda is different: she seeks to draw attention to the essential role of material things in spiritual life. She facilitates the transformation of Shiva, the indifferent hermit, to Shankara, the benevolent householder.

Menaka and Mohini are the same in appearance. But while Menaka seeks to entrap the sage, Mohini seeks to enlighten the sage. Menaka is indifferent to the spiritual downfall of the Tapasvin, while Mohini balances material growth with spiritual growth. When an organisation is focused on its sales numbers alone, and not the benefit to the customer, they function as Menakas — seductive nymphs serving the shareholders alone. When sales numbers are a consequence of serving or helping a customer, the organisation functions as a Mohini.

Suresh, a High Net Worth Individual, was met by a wealth manager from a prestigious bank. Suresh tried avoiding the individual as he kept getting calls from many such ‘wealth managers’ but the persistence of this particular gentlemen impressed him greatly and he agreed to meet him one Friday afternoon.

Chandrahas was an amiable young man who impressed Suresh with his style and sincerity. He then proceeded to present his bank’s offerings to Suresh — how they would manage his assets and investments in various debt and equity funds. Suresh liked the approach and considered signing on. Then he asked Chandrahas the question, “Are you interested in managing my wealth or achieving your bank’s target?” Chandrahas was tongue-tied. What could he say? Weren’t the two objectives the same? They were supposed to be but he was not entirely sure.

While Suresh liked Chandrahas, the person, he knew the lad was but a cog in the banking wheel, a Menaka sent out to beguile and entice clients to achieve the bank’s goal. Once within the bank’s network, he would be subjected to standard banking processes and rules, like any other individual. All special attention given to him at the time of signing him on would disappear. Suddenly he would be reduced to a customer number and be subjected to the impersonal automated telephone responses. Chandrahas was merely doing his job — signing on the client. He was a tool in a larger game, a game that did not really care for Suresh; it cared only for his wealth.

What Suresh wanted was a Mohini. Someone who genuinely took care of his wealth and was not merely interested in meeting the sales targets of a particular bank or institution, someone who did not push his bank’s products in the name of wealth management, someone who did not shove an insurance policy down his throat with an eye on the commission alone.

The reference point for Menaka’s agenda is the Deva; she works to please her masters. The reference point of Mohini’s agenda is the Tapasvin himself; she cares for his growth. Chandrahas would like to be a Mohini, genuinely help the client grow his wealth, but his employers insist he serve as Menaka, bag the client with the sole intention of gaining access to his wealth.