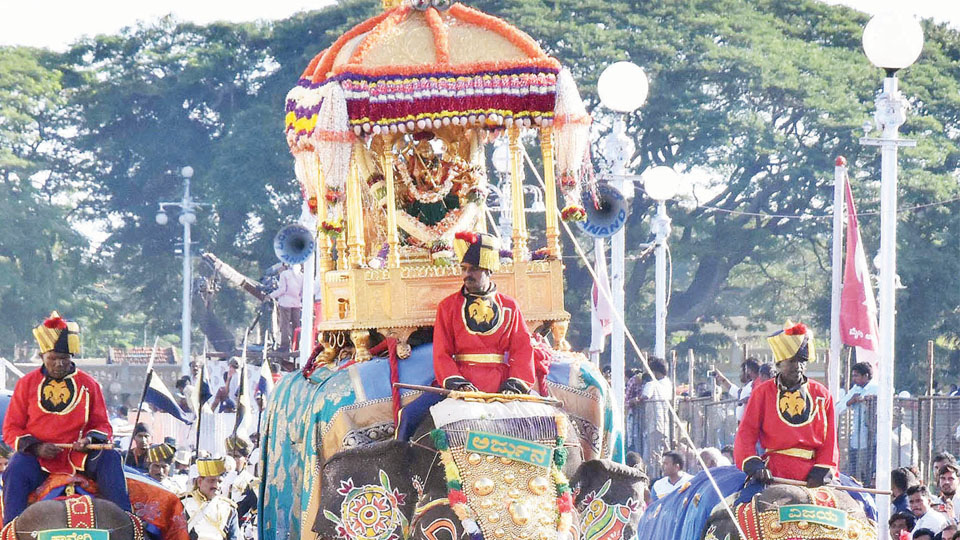 Mysore/Mysuru: Perhaps for the first time in the history of Nada Habba Dasara in Mysuru, there may not be Jumboo Savari procession from Mysore Palace to Bannimantap Torchlight Parade Grounds on Vijayadashami Day and other activities including cultural events anywhere in the city owing to Covid-19 pandemic.

Co-operation and Mysuru District-In-Charge Minister S.T. Somashekar told Star of Mysore that Chief Minister B.S. Yediyurappa had already indicated that this year’s Dasara will be simple one without affecting its 500-year-old tradition. Accordingly, it is unlikely to have cultural events at least in six to seven different locations, State-level sports, wrestling, kite festival and other entertainment programmes.

“As far as my knowledge, the CM may offer floral tributes to the idol of Goddess Chamundeshwari seated on the Golden Howdah-carrying elephant on Vijayadashami Day and take it in a procession within the Palace premises.”

“Entry of public inside the Palace may be restricted. Yediyurappa may complete the formality of holding Dasara in a most simple manner without hurting the sentiments of Mysureans. Holding any large-gathering event during all the ten days is risky, especially in the current situation,” the Minister observed.

However, Somashekar, said a final decision in this regard will be taken at a High-Power Committee meeting to be chaired by the CM in Bengaluru in next couple of days. The elected representatives from Mysuru would be consulted before taking decision.

After that meeting, he and Tourism Minister C.T. Ravi would come to Mysuru to hold another round of discussion before finalising the road map for Dasara-2020 preparation.

Deputy Commissioner of Mysuru Abhiram G. Sankar, who is also the Dasara Special Officer,  had written to Additional Chief Secretary regarding holding a High-Power Committee meeting as the days are fast approaching for Dasara preparations.

The decision regarding the formal inauguration of Dasara atop the Chamundi Hill and inviting a chief guest to declare open the ten-day festival (Oct. 17 to Oct. 26) would be decided by Yediyurappa in the meeting.

The Minister said the Government was constrained to do this following strict instruction from the Government of India on avoiding gathering of people due to fast spreading of pandemic. It would be an impossible task for anybody to ask people to maintain social distancing during Dasara festivities. Though Dasara is a big event as far  as Mysuru City is concerned, it has to be celebrated in low-key this time due to the threat of   Corona, he added.