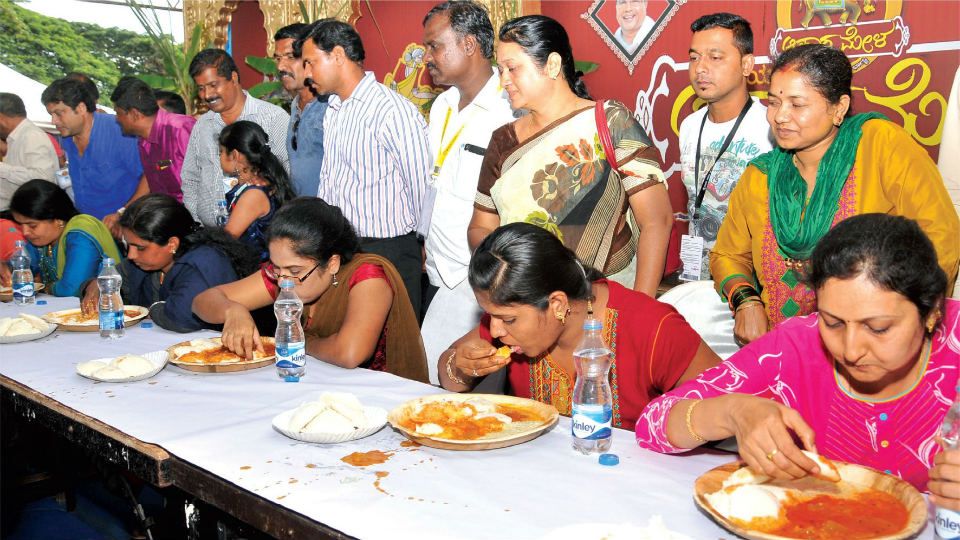 Mysuru: The enthusiastic women were through with just four idlis while the men could gobble a plate full of uppitu in just 54 seconds!

The event was an eating contest for men and women organised as part of Dasara Aahara Mela at Scouts and Guides Ground here yesterday.

Totally, 21 men and women had registered for the contest and a tiny-tot picked up 10 contestants in each category.

The idli-eating contest commenced first with Shwetha Urs coming first with four idlis followed by M.S. Mahalakshmi in second  place with three idlis and Rajashri coming third with two plus idlis. In the uppittu-eating contest, Kaushik from Srirangapatna stood first followed by Suresh of Kuvempunagar and Balakrishna of Jayalakshmipuram in second and third places respectively.

Dr. K. Rameshwarappa, Deputy Director, Food and Civil Supplies, distributed the certificates to the winners. District   Minister Dr. H.C. Mahadevappa paid a surprise visit to Aahara Mela last evening and sought the opinions of the visitors. Later he tried his hand on cooking by spreading Dosa batter on a  hot tawa.