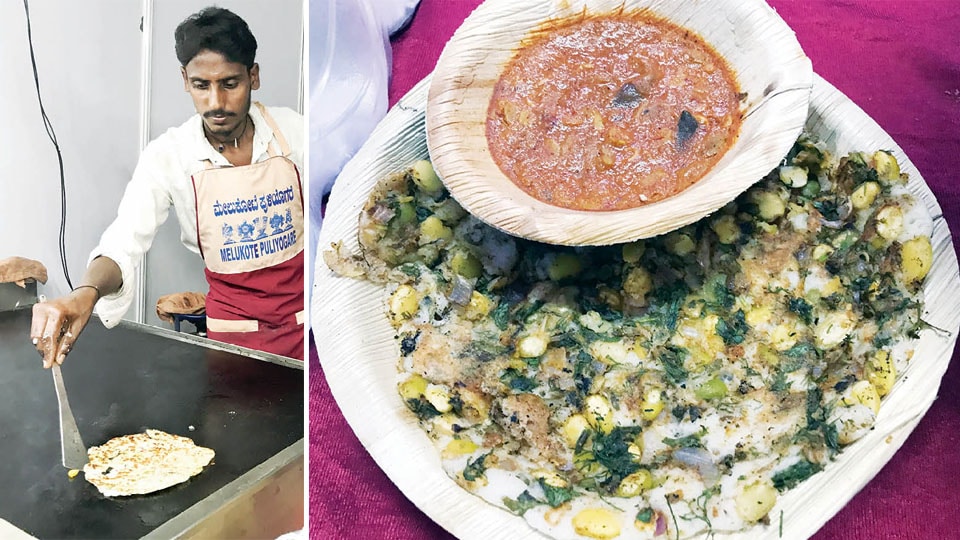 George Bernard Shaw has rightly said there is no love sincerer than the love of food. With craving for various varieties and a treat for the taste buds, Mysureans are in for a food carnival at the ongoing Mysuru Dasara Aahara (Food) Melas.

The Food Mela has been organised at two places — one in the MUDA Grounds near Lalitha Mahal Palace Hotel and the other at the Scouts and Guides Grounds. The Mela caters to the needs of the modern as well as the traditional crowd as it has all types of food cuisines and varieties ranging from Donut, Pizzas, Burgers to continental dishes, chats, desserts, Biryanis, Akki Roti, Jowar Roti etc. The Melas have an abundance of options in every single type of dish. Biryani has been the central force of attraction for all foodies and this Mela has as many as 10 to 15 different types of biryanis like the Andhra Biryani, Arabian Biryani, Hyderabad Dum Biryani, Bhatkal Special Biryani, etc. To add more festivity to the ambience, cultural programmes keep the audience engaged as they chomp on and engulf themselves with music and food.

With a serene backdrop of green lush Chamundi Hill and the magnificent Lalitha Mahal, the Food Mela at this MUDA Grounds is not just a pleasing sight but there is an aroma of food in the air that attracts the nearby commuter.  There are a total of about 74 food stalls here. One such stall, that stood out from the rest was a barbecue that was setup outside the stall, with fresh meat being cooked and this sort of a concept of a live kitchen ensured attraction from the public. They sell different varieties of barbecued meat such as drumsticks, boneless chicken, chicken wings, lollipops, fish fry etc.

Speaking to Star of Mysore, Sharat and Ashwin, joint owners of Barbecue — Indian Style Barbecue, said, “We have started this new venture recently and we have our outlet near Vijayanagar Water Tank. Our concept is different. We do not use any oil, any artificial colour or flavouring. Our food is cholesterol-free and we use freshly grounded Indian spices. We have received good response from foodies and we have buy-one-get-one offers at our outlet too.”

Jayamma, who runs the Navaratna Roti stall, said, “This navaratna roti is a healthy dish, with no compromise in taste. It caters to both the health component as well as triggers the taste buds. As the name suggests, this roti has 9 essential ingredients along with the rice flour. They are jeera, capsicum, carrot, jowar or corn, coconut, coriander seeds/leaves, sesame seeds, onion, rice flour, etc. The rice is also boiled first and then it is grinded into a flour paste. Along with that we have a special brinjal curry that blends well with the roti. We also sell Akki roti and Maddur Vada.”

Situated at the heart of the city, the Mela here accommodates to a larger incoming crowd and has about 95 stalls in place.

Avare Bele special stall is one such unique stall that drew the attention of foodies. The stall was dedicated to cook food stuffs with Avarekalu (Hyacinth Beans) being one of the prime ingredients. Raju, one of the members of Avare Bele stall, said, “Here we have a couple of Avare Bele fried mixtures, Avare Bele Vadas, Avare Kalu curry, Avare Kalu Roti, Avare Belle Special Dosa an Avarekalu Usli. We have come from Bengaluru and with this unique concept have been able to attract crowd to our stall.”

Another such shop which was flooded with people holding on to their plates was the Suchi Ruchi team’s fresh hot Poli (Holige) stall. With sugary aroma flowing out of the shop, the feet of people were naturally drawn towards this stall, as people waited in lines to have a bite at this traditional delicacy which was being tossed up and down on the hot Tava (cooking pan). Owner Harish said, “We have been coming to this Dasara Food Mela for 5 years and we have made a mark. We have about 7 different varieties of Poli — Daal, Coconut, Dates, Almond, Cashew, Groundnut and Carrot.

Preetham, who was munching on to the sweet poli said, “We came to the Mela to try different types of food. I came to the Mela with my family and we tried different types of food. We wanted to try some foods that are generally not available or accessible in our nearby surroundings. This poli stall caught our eye. So, we bought different polis and we took a bite from each other’s plate. I personally liked the Almond poli. We will also be trying out the other stalls and enjoy the evening.”