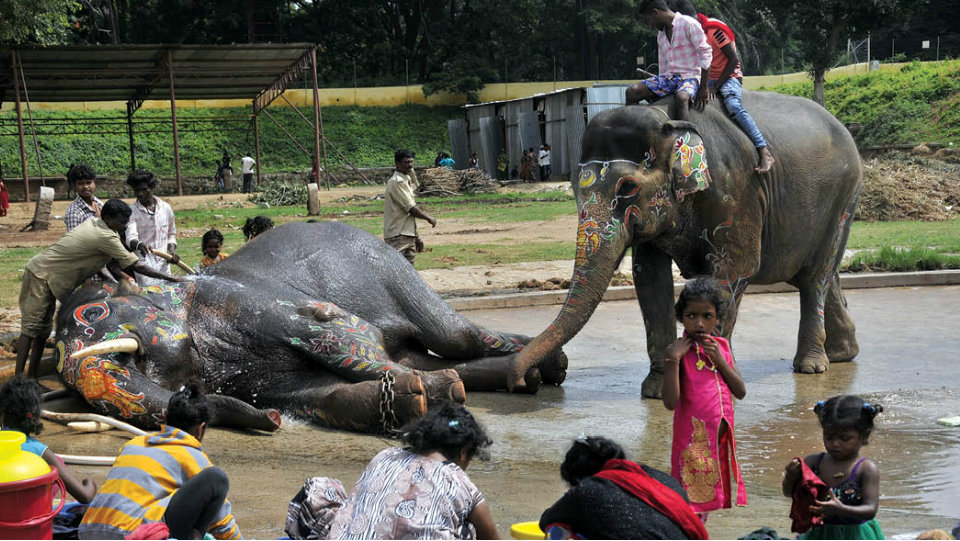 Dasara elephants to return to camps on Oct. 3

Mysuru: The 15 Dasara Elephants including the cynosure of all eyes Arjuna, the howdah elephant were all in a relaxed mood, this morning, after completing a successful day yesterday, winning the hearts of lakhs of people.

The Gajapayana (elephant march) will begin on Oct. 3 after the puja to them at 8 pm and they will be returning to their respective elephant camps. Howdah elephant Arjuna will return to Balle Camp in Nagarhole, while Gajendra will be back in K.Gudi camp in Chamarajanagar. The seven Dasara elephants will return to Mathigudi in Nagarhole and the other six elephants will go back to their home in Dubare camp in Kodagu.

Elephants relax: All the 15 elephants were found relaxing at the Mysore Palace premises after days and months of rehearsals with the Mahouts and Kavadis giving them bath. They were serving the elephants paddy mixed with jaggery, leaves of Banyan tree, coconuts, sugarcane and other items. DCF Yedakondalu speaking to Star of Mysore said, “I thank the District Administration,  Police, Dasara Special Sub-Committee for the smooth conduct of the entire Dasara.”

Vishalakshi Devi daughter of Jayachamaraja Wadiyar, the last ruler of Wadiyar dynasty, accompanied by her daughter Shruti visited the elephants, who were relaxing in the Mysore Palace premises and offered them jaggery and other food items.

Mahouts, Kavadis on tour: The Mahouts , Kavadis and their family members, numbering 150 in all, will be taken on a tour of important destinations including  Srirangpatna, Ranganathittu, KRS tomorrow in buses, said DCF Yedukondalu.

Folk troupes return: Majority of the folk troupes who had come from various parts of the State and were staying at Nanjanraja Bahadur Choultry on Vinoba Road returned to their respective destinations last night itself.