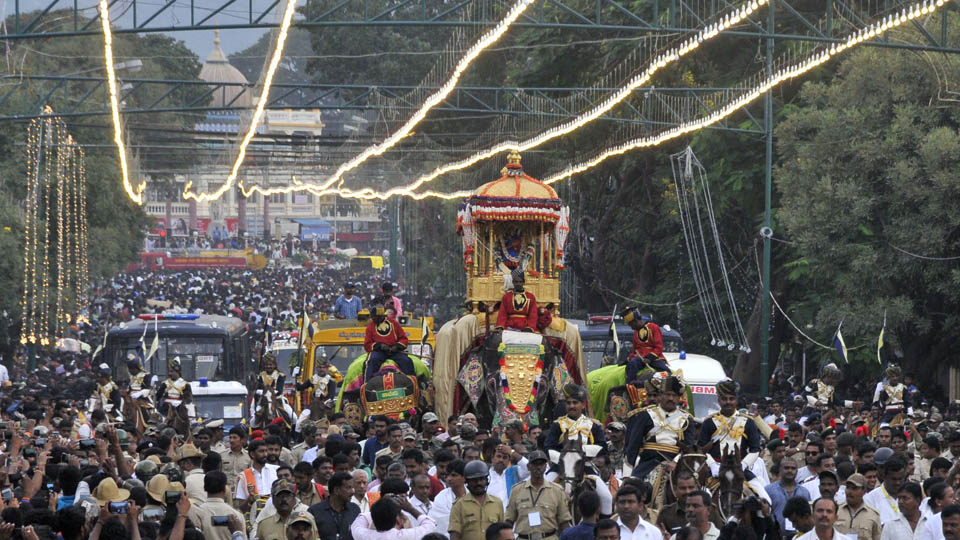 Mysuru: There is hardly any city in the country, which celebrates the ten-day Dasara festival with the same pomp, pageantry, razzmatazz, culture and history all rolled into one like the one in Mysuru.

The 407-year-old Dasara celebrations started by Raja Wadiyar in Srirangapatna, has moved from dynasty-ruled festival to Nada Habba or people’s festival. However, every year the incumbent ruling party promises that it will be held along the lines of Republic Day Parade in Delhi’s Rajpath. But, it has remained a pipe dream as one witnessed this year too, the same chaos, indiscipline, disorderliness and plain lack of respect for the animals and the artistes. If the model of R-Day Parade is followed then there should not be many people surrounding the folk troupes, floats, and the elephants. However, what we see is exactly the opposite with hundreds surrounding the paraphernalia throughout the procession route. The only place where there is an exception that is seen is when the Chief Minister showers flower petals on the elephant carrying the 750 kg golden howdah to mark the commencement of the final procession when there are just five or six people on the dais.

Security lapse: The very fact that the security personnel including the Black Cat Commandos who were brought in to prevent any untoward incidents were found taking photographs of the procession, displayed the utter lack of concern of the Government and those involved in the safety of the people.

Helicopter ride: DCF V. Yedukondalu had written to the Deputy Commissioner D. Randeep and the Mysore Airport’s Director Manoj Kumar Singh not to allow the helicopters to fly over the Mysore Palace and on the procession route especially on Sept.30, the Jumboo Savari day.

Throwing all caution to the winds the Helicopter Joy Rides continued yesterday till 2 pm, even as the Dasara elephants were getting ready for the majestic march as part of the Jumboo Savari.