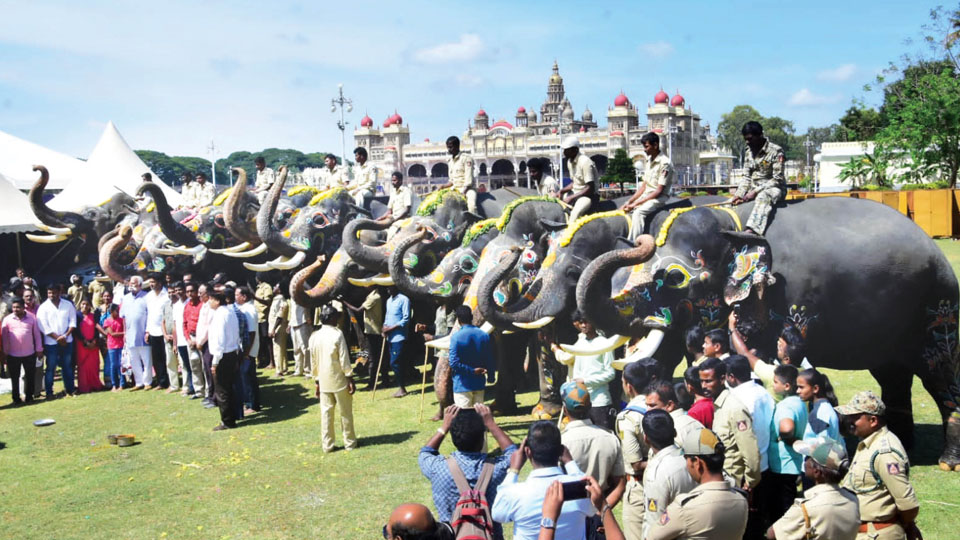 Mysore/Mysuru: The Dasara elephants, which were the prime attraction in the Vijayadashami procession on Oct. 5 were given a warm and emotional send-off from the Palace premises this morning. They headed to their respective elephant camps and will continue doing the tasks assigned to them by the Forest Department, minus the nutritious food offered to them till now during the festival.

Traditional puja was performed to the elephants near Kodi Someshwara Temple in the Palace premises by the Forest Department and the process of boarding the elephants on trucks began. The trucks left at about 1.15 pm and the District Police escorted till their limits. People had gathered on the road sides and waved at the elephants, Mahouts and Kavadis. Many onlookers turned emotional when elephants raised their trunks as if they were waving back at them.

In all, 14 elephants were brought to Mysuru in two batches. However, Lakshmi delivered a male calf, named Sri Dattatreya and the number of elephants went up to 15. It was for the first time in recent years that a Dasara elephant delivered a calf in the Palace premises during the festival.

Only nine elephants participated in the procession while the others took part in the regular rehearsals, except for Lakshmi and her calf. Other elephants were made to walk on the roads to make them familiar with Dasara and in the coming years, they will be included in the procession team after behavioural assessment and acclimatisation. The Department did not take the risk this time.

At about 7.15 am today, Lakshmi and her son Sri Dattatreya along with Kumki elephant Chaitra left for Rampura Camp in a truck. Lakshmi was initially reluctant to board the truck but the Forest staff placed her son inside the truck and lured her inside.

Though more than 20 Mahouts and Kavadis tried their best to make him climb the truck, Srirama refused for over two hours and did not budge even when Abhimanyu tried to push him inside. He was also poked with the Ankush (a sharp instrument used to guide elephants) but Srirama did not relent.

Later, huge iron chains were tied around him and Abhimanyu was made to drag him, but Srirama refused to move. Finally, after two hours, Abhimanyu gave a mighty push and made him board the truck.

Deputy Conservator of Forests (DCF) Dr. V. Karikalan told media persons that it was Srirama’s sixth Dasara and he had not seen such a large number of people gathered to witness Jumboo Savari this year.

“All the elephants behaved well and did not panic to the booming sounds of cannons and also to the noise created by the large crowd. Even new elephants Bheema and Mahendra did not panic. Though it is the third time Abhimanyu is carrying the Golden Howdah, it is for the first time he carried it from the Mysore Palace to the Torchlight Parade Grounds at Bannimantap. In 2020 and 2021, Dasara was held inside the Palace due to COVID pandemic,” the DCF said. Pointing out that Abhimanyu has all the qualities that a captain needs, Dr. Karikalan said that Abhimanyu also guided other elephants. All Mahouts, Kavadis, special Mahouts and elephant caretakers were given Rs. 10,000 each from the Mysore Palace Board.