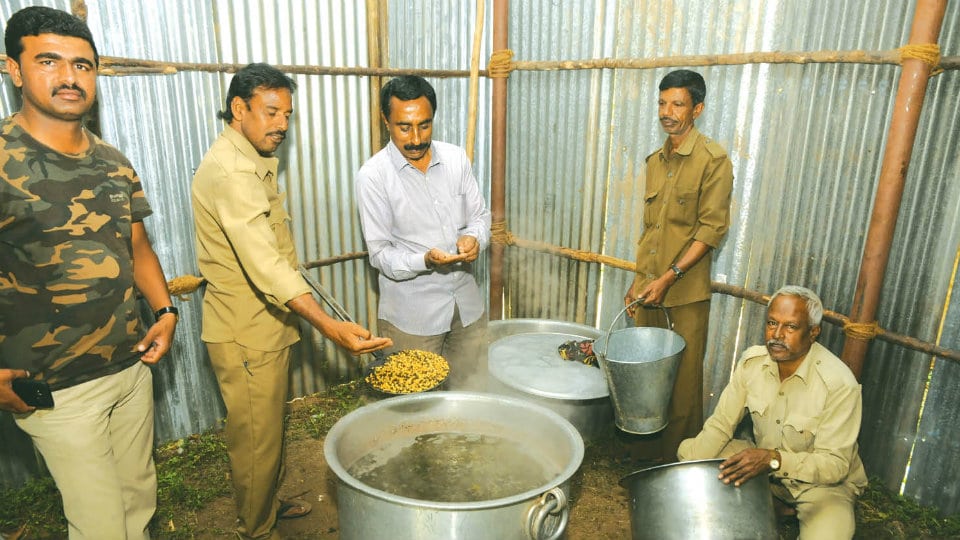 Mysuru: The Dasara elephants, which have arrived in city from various elephant camps to participate in the world famous Jumboo Savari and housed in Mysore Palace premises, is being given special care and are on special diet.

The elephants are being given nutritional food twice a day so that the elephants could gain weight, strength and stamina to participate in the grand finale, the Jumboo Savari by walking a distance of about four kms from the Mysore Palace to the Torchlight Parade Grounds in Bannimantap.

What is given: At present, the first batch of six elephants, led by Howdah elephant Arjuna, is being provided nutritional food and additional supplements twice a day at 5.30 am and 5 pm to increase their weight and strength. They are given Urad grain, Green Gram, Wheat, Boiled Rice and a mixture of Beetroot, Carrot, Radish and Cucumber with cooked onions.

How it is made: Special and utmost care is being taken while cooking food for these Dasara guests as a small mistake would create a lot of problems to the elephants and hence, Rangaraju, the assistant to the veterinarian had been made in-charge of it. 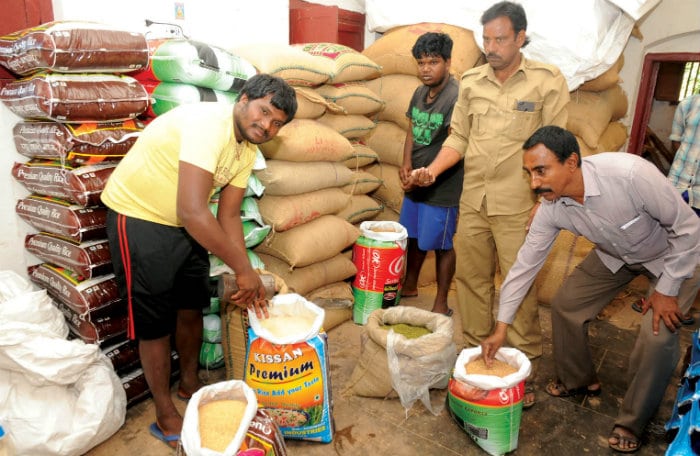 A separate shed has been constructed to cook food for these elephants near Sri Kodi Someshwara Temple in the Palace premises and food is being prepared in large vessels, which begins at 10.30 am. First, Urad grain and Wheat is cooked in the large vessel to which Green Gram and onions are added which will be cooked again for about two-and-a-half hour and kept aside for an hour. At about 3.30 pm, the cooked food is spread on large plates and the cooked food is made into large balls (mudde) which is given to the elephants before the commencement of training in the evening.

After the training gets over, food is again cooked at about 7 pm and is stored in the store room which will be locked after 9 pm. The next day morning at about 5.30, the cooked food is again made into large balls and given to the elephants before 6.30 am, following which the jumbos will be taken for training.

But, Arjuna, who carries the Golden Howdah during the Jumboo Savari is being provided 25 to 30 kg of food for one time and all tuskers are given one kg of butter everyday. Arjuna is being given one-and-a-half kg butter everyday. This apart, each elephant is given 450 to 600 kg of Banyan leaves, 250 kg green grass and 50 kg dry grass.

Apart from providing the above food, the elephants are being provided with additional supplement of 35 kg which is a mixture of paddy, jaggery, coconut, groundnut, salt and other items. The ingredients are mixed well in a vessel and the mixture is placed inside dry straw and given to these elephants.

Everyday, these elephants are provided drinking water thrice. The elephants consume about 250 to 300 litres of water daily. Water is given after they consume food at 5.30 am before leaving for training, in the afternoon and before going to the training in the evening.

Meanwhile, Veterinarian Dr. D.N. Nagaraj told SOM, “as we do not want to question their belief and hurt their sentiments, we do not force the Mahouts and Kavadis to take the elephants for training” and added that a day’s rest for the elephants is needed. Hence, there was no training today, Dr. Nagaraj said.

In order to increase the strength of the elephants, nutritional food and supplements are being given. The staff are keeping a hawk eye on the health of the elephants. We have already commenced giving nutritional food to the first batch of six Dasara elephants and preparations are going on to provide the same food for the second batch of elephants. Though Arjuna has the capacity and strength to carry the 750 kg weighing Golden Howdah on his back, special care is being taken to make him more stronger. —Veterinarian Dr. D.N. Nagaraj

To increase the appetite and physique of Dasara elephants, multivitamins are being given. Limited nutritional food is provided initially which will be increased day-by-day. As Arjuna will be carrying the Golden Howdah on his back during the procession, he is being given more food than other elephants. From the day training of carrying the wooden howdah begins till the Jumboo Savari day, more quantity of food is given. Utmost care is being taken while preparing the food and following instruction from the Veterinarian, the quantity of food would be increased. —Rangaraju, Assistant to the Veterinarian