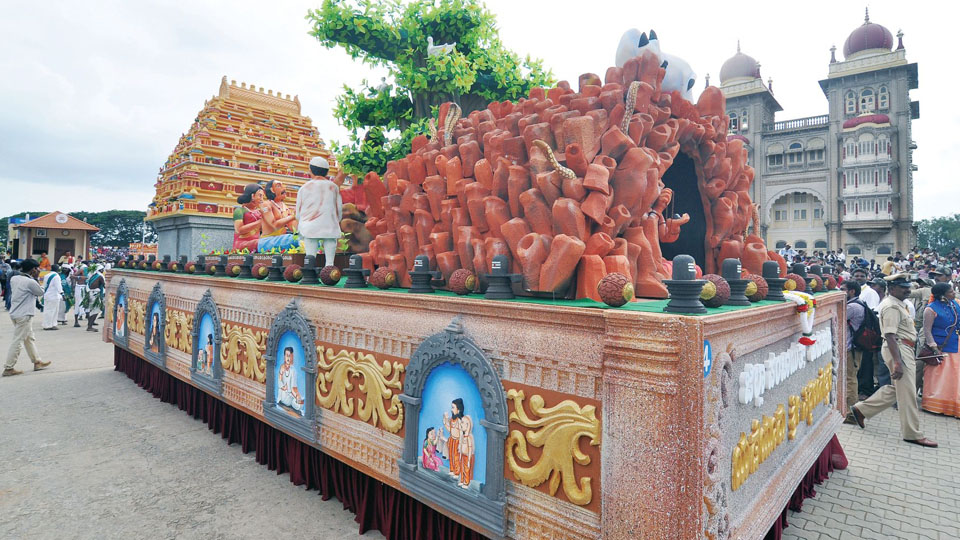 Dasara procession to have 42 tableaux

Mysuru: This year’s Dasara procession on Oct.19 will be all the more attractive with the participation of 42 tableaux. Addressing a press meet at ZP Hall here yesterday, Dasara Tableaux Sub-Committee Deputy Special Officer K.B. Prabhuswamy said that tableaux are getting ready covering all the 30 districts of the State.

For the first time, the Department of Higher Education has come up with a tableau on the journey of Universities in the State, he said pointing out that more than 150 artists were on the job of finishing the tableaux and all of them were expected to be ready by Thursday for the show. Prabhuswamy said all the districts are participating in the procession with their tableaux on different themes.

Noting that last year 40 tableaux were part of the procession and the number this year has gone up by two, he said that Bylakuppe’s Golden Temple is the tableaux from Mysuru district.

Stating that steps had been taken to avoid repetition of tableaux in the procession this year, he said that although in some cases the theme may be the same, the content will be different as in the case of Anubhava Mantapa.

He further said that the top three tableaux will get a prize of Rs. 30,000, Rs. 20,000 and Rs. 10,000 respectively besides trophies. All the participants will get certificates.

A 3-member panel of judges from the city’s CAVA has been appointed to identify the top three tableaux, he said.

The tableaux will also feature flood-affected people in Kodagu, the National Cadet Corps (NCC), ‘My Vote My Right’ on voter awareness by the SVEEP office of Mysuru and on Legal Services by the Mysuru District Legal Services Authority, Prabhuswamy added.