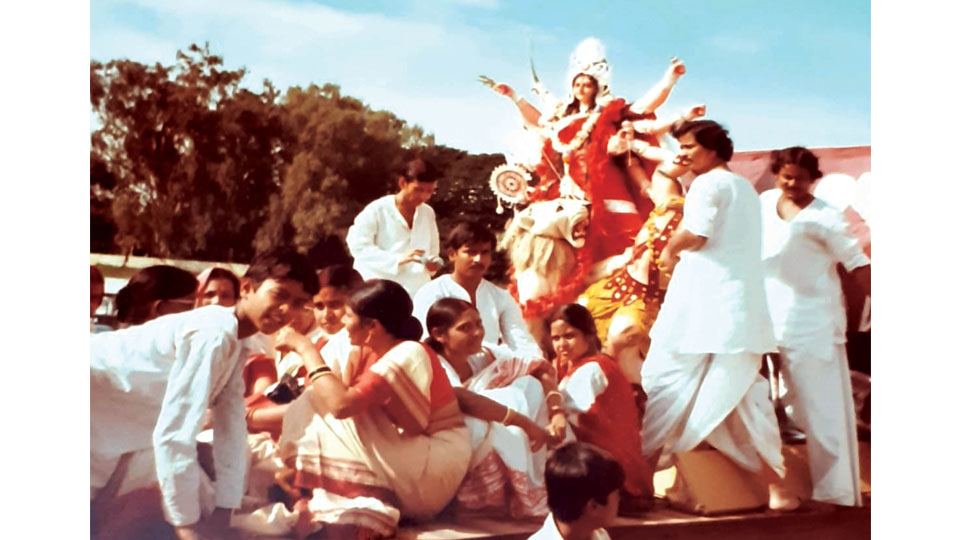 When Bengalis of Mysuru won Best Tableau Award during Dasara-1980

I was then the principal organiser-cum-President of Bangiya Sanskritik Parishad, Mysore. This was the banner under which we commenced celebrating Durga Puja for the first time in Mysuru, a city we now call our home, way back in 1979.

In fact, we were a small group previously known as ‘Purba Bharatiya Majlish,’ a group from Eastern India. But then we registered ourselves as Bangiya Sanskritik Parishad, Mysore (a Bengali Cultural Association).

That was the time of honour, prestige and glory for the Bengalis of Mysore. We started participating in the Dasara procession and used to have Durga Puja as the theme.

It was a matter of pride when our tableau, decked and decorated in 3 trucks, used to roll down the Dasara procession route originating from the Mysore Palace and culminating at Bannimantap — from where we used to proceed for immersion at holy confluence of Rivers at Sangam, Srirangapatna.

Along the entire route up to Bannimantap from Mysore Palace, we were cheered and applauded by the audience who would line up all along the road.

Our ladies, dressed in red-bordered cream-white sarees, used to sit on the trucks with conch-shells and accompanying puja ingredients.

At the background used to be the unique sound of beating of dhak (drums). We menfolk used to march ahead of the trucks, clad in our traditional dhoti and white kurta. This entire episode was a spectacle to cherish. It also showed the cultural diversity that was in Mysore.

In 1980, we were awarded the Best Tableau (1st Prize) in the Dasara procession. Many Bengalis of our city toiled hard to achieve this glory and honour. Some of these noble souls are not with us any more but their contributions will be etched in the memory forever.

We continued to be an integral part of the Dasara procession event for a number of years till the procession was limited to the districts of Karnataka only and private participation was discontinued.

The then Chief Minister Ramakrishna Hegde personally requested me to withdraw our tableau from the spectacle even though I insisted that Goddess Durga is another form of Goddess Chamundeshwari.

A lot of water has flown under the bridge since those golden years and a few more Durga Pujas are being performed in this city under different banners but the glory, honour and prestige of the first original Durga Puja under the banner of Bangiya Sanskritik Parishad, Mysore, cannot be erased.

The original Bangiya Sanskritik Parishad, Mysore, has now been renamed and registered as Bangiya Samiti, Mysuru and we extend a warm welcome to all Mysureans to join us in our celebration of Durga Puja which will be held between Oct. 1 and 5 at the International Youth Hostel premises on 5th Main Road, Gokulam 2nd Stage.