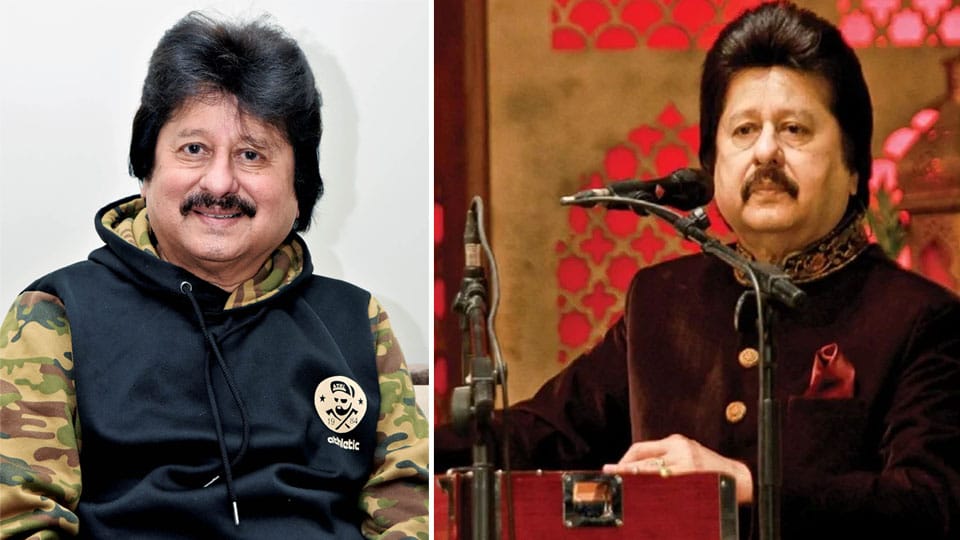 Having released his first album ‘Aahat’ in 1980, the legendary singer will complete 40 years in music industry in December this year. Star of Mysore caught up with the iconic singer at Hotel Radisson Blu Plaza last evening. The ghazal maestro will perform at Mysore Palace on the first day of Dasara Cultural Programmes this evening, against the backdrop of the illuminated Palace. Excerpts…

Star of Mysore (SOM): Is this your first visit to Mysuru?

Pankaj Udhas: No, I have been here before. Just few minutes back I was trying to recall the last time I visited this city. I guess it must be around eight to nine years back, for the same event.

Pankaj Udhas: Well, I have fond memories of the city. Of course, things have changed now. It was way back in 1970s that I visited the city for first time as a student of St. Xavier’s College in Mumbai. Our college tour started from Bengaluru and the next destination was this beautiful and historic city. After staying here for a few days and visiting majority of the tourist spots, we travelled to Bandipur and Ooty.

SOM: Does Mysuru fascinate you?

Pankaj Udhas: Though the city has changed a lot, it has always maintained its essence and beauty. People want to visit Mysuru to experience its rich culture and tradition. Mysuru has always held an influential position in the world.

SOM: How is it to be performing at Mysore Palace after a gap of eight years?

Pankaj Udhas: Well, there are a few cities and venues which are special for an artiste. They generate those vibes to connect more to the audience. I think Mysuru and the Royal Palace are among those places. And to be performing at the Mysore Palace is an honour for any artiste.

SOM: India is truly blessed to have ghazal maestros like you, Jagjit Singh (now no more), Talat Aziz and many more. However, do you feel that ghazal has lost popularity now?

Pankaj Udhas: I would rather say that it is off the focus for now. I was performing at a famous venue in Delhi on Friday and the auditorium was jam-packed with 2,500 people who had bought tickets to watch show. So, I would say that ghazals are still popular and people still love this form of music. But now, it is known fact that music has changed a lot not only in India but worldwide.

Pankaj Udhas: Music has always been a combination of good poetry, good melody and wonderful singing. I think all three are the soul of a good song. Unfortunately, what has happened is that music across the world has changed directions and lacks good poetry and melody. I personally feel that we are going through a phase, not only in India but all over the world, where music has become youth-oriented. What we are listening today, be it in Bollywood or anywhere, there is neither melody nor poetry. I think sooner or later, the golden era of good music will make a comeback.

SOM: You being a science student, how did music come in to your family with both your elder brothers Manhar Udhas and Nirmal Udhas also involved in ghazal and playback singing?

Pankaj Udhas: It’s a long story. All I can say is that it was my father Keshubhai Udhas who influenced us to take up music. He used to play a musical instrument Dilruba, a string instrument played using a bow, as a hobby and my mother Jituben Udhas, though did not pursue it professionally, was a good singer. With both of them involved in music, it generated an atmosphere which got us hitched to music.

SOM: What special is in-store for Mysureans this evening?

Pankaj Udhas: God has been kind to me over a period of time (40 years). I have been fortunate enough to release a number of albums apart from contributing to Bollywood music as well. I would first look to sing those numbers which the audience want me to perform and of course I would also want to sing some of my favourites as well.

SOM: Your message for Mysureans on the occasion of Dasara?

Pankaj Udhas: Dasara as we all know is victory of good over evil. It is a reminder to everybody that good always wins and the evil doesn’t last forever.

SOM: There is one movement in our country that has been propagating a blanket ban on Pakistani artistes. What’s your take?

Pankaj Udhas: It is very complex political issue and difficult to comment because I do believe that Indian side has solid reasons to say what they are saying. If you recall, Pakistani artistes have been visiting India for a long time now. Latest artistes being Rahat Fateh Ali Khan, Atif Aslam and others have made their names through Hindi cinema. India has been very kind to them and there must have been a strong reason for our country to have taken such a stand.

SOM: Thank you for your time.

Pankaj Udhas: You are welcome.