Home » News » Day-2 of strike: Couple of KSRTC buses get onto roads 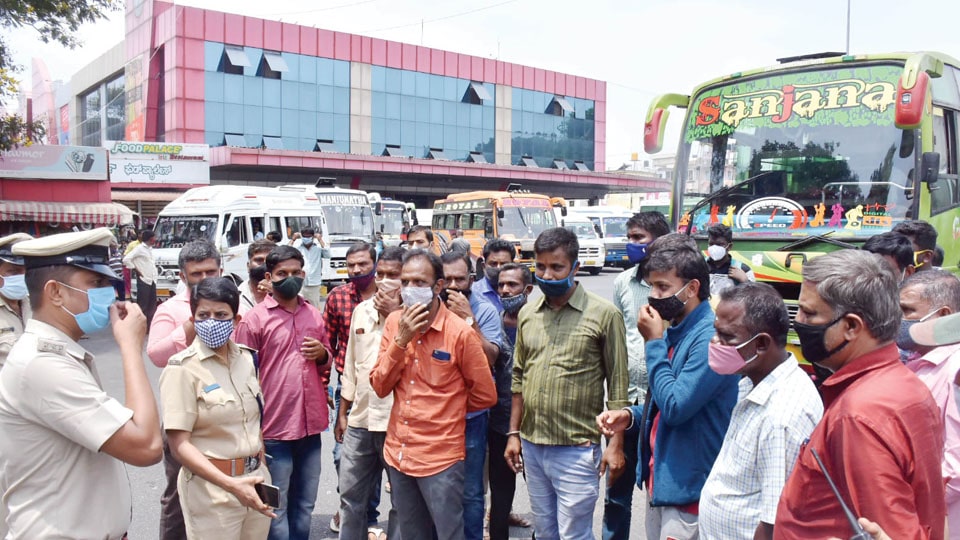 Day-2 of strike: Couple of KSRTC buses get onto roads

Mysore/Mysuru: The day two of KSRTC strike seeking fulfilment of various demands continued to paralyse the city but today, people were not that affected as a few buses got onto the roads as the Government has threatened to withhold March salaries if the strike continued.

Over 15 to 20 Airavat and Rajahamsa buses carried people to places including Bengaluru, H.D. Kote, Periyapatna and Madikeri and a handful of the regular Saarige buses operated.

Private buses, maxi cabs and other transport services were seen operating in different parts of the city, coming to the rescue of stranded passengers. There were over 160 private buses that were ferrying people.

Under the banner of Karnataka State Road Transport Employees League, KSRTC staff had called for an indefinite strike starting yesterday, demanding that the Government implement a salary system as per the 6th Pay Commission for workers of State transport undertakings.

The day one of the strike yesterday saw fleecing by private bus operators who charged anywhere between Rs. 350 to Rs. 400 per seat to Bengaluru.

Today the ticket prices had come down to Rs. 200 per seat. Also, people who preferred private buses had to wait till the buses to be full and the drivers refused to move unless a bus had filled to the capacity.

Meanwhile, the management of the Road Transport Corporations have begun issuing notices over the unauthorised absence of workers.

Chief Minister B.S. Yediyurappa has said that a decision on invoking the Essential Services Maintenance Act (ESMA) will be taken depending on the situation in the wake of the strike.

Citing public inconvenience, he requested the striking employees to get back to work. Yediyurappa also alleged that ‘selfish motives’ of some people were behind the strike.

“We have fulfilled eight of their (workers) nine demands, but they are adamant and have stopped buses and are creating trouble for the public. I appeal to them, get back to work, we can talk,” Yediyurappa said.

On whether the Government was considering invoking the ESMA, he said, “We are discussing everything, depending on the situation, we will take appropriate decisions.”