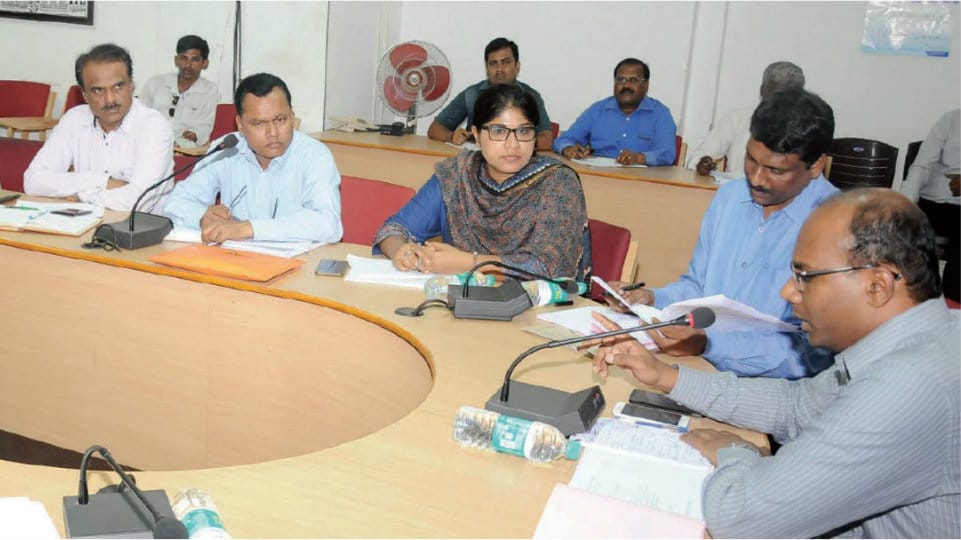 Mysuru: Deputy Commissioner D. Randeep has asked the Tahsildars of the district to solve the drinking water supply problem and release the compensation to the farmers at the earliest.

Chairing a meeting on drought relief, drinking water problem and other revenue-related issues, at his office here yesterday, in which officials from various Departments attended, he said that water should be supplied in tankers until the problem of drinking water is solved in the district.

He asked the officials of the Department concerned to first clear the dues of the water tankers and if required ask him for the grants to make payments to them. At no time should the excuse be given that water cannot be supplied because of lack of funds, he warned them.

It is quite some time since the the multi-village drinking water scheme was launched. The works related to this going on in Varuna and other places must be completed at the earliest, he said.

Revenue-related issues: Randeep, later took up the issues related to Revenue Department and said that including RTC amendment, the other problems like Revenue Mojani survey and Podi Mukta Abhiyan, be resolved by the Tahsildars of the taluks concerned.

K.R. Nagar Tahsildar, speaking on the occasion, said that the Government in its recent order had asked for steps to be taken to protect Gomala lands. However, in K.R. Nagar’s Sakkare village about 30-40 years ago itself, nearly 200 people have built houses and are residing in them. The whole village is in Gomala land. The villagers here are insisting on Title Deeds.

The Deputy Commissioner sough the information from Mysuru Taluk Tashildar T. Ramesh Babu. He informed that if houses have been built on Gomala land then there is provision to issue Title Deeds. The DC directed the official to grant the same to the villagers in K.R. Nagar taluk.

The PWD officials brought to the notice of Randeep that the compound wall of the Government Guest House in Nazarbad be raised as miscreants were scaling the wall and indulging in anti-social activities and also destroying the trees planted by the Forest Department. The MCC officials said that decision had been taken to widen this stretch of road. If the permission is given, then the compound would be constructed by the MCC itself.

Prepare for CM’s visit: Chief Minister Siddharamaiah will hold Janata Darshan and interact with the officials on May 20 from 11 am to 5 pm at the Government Guest House. Randeep asked the officials to come fully prepared for the meeting with all relevant documents and information to provide to the CM when he asks for them.