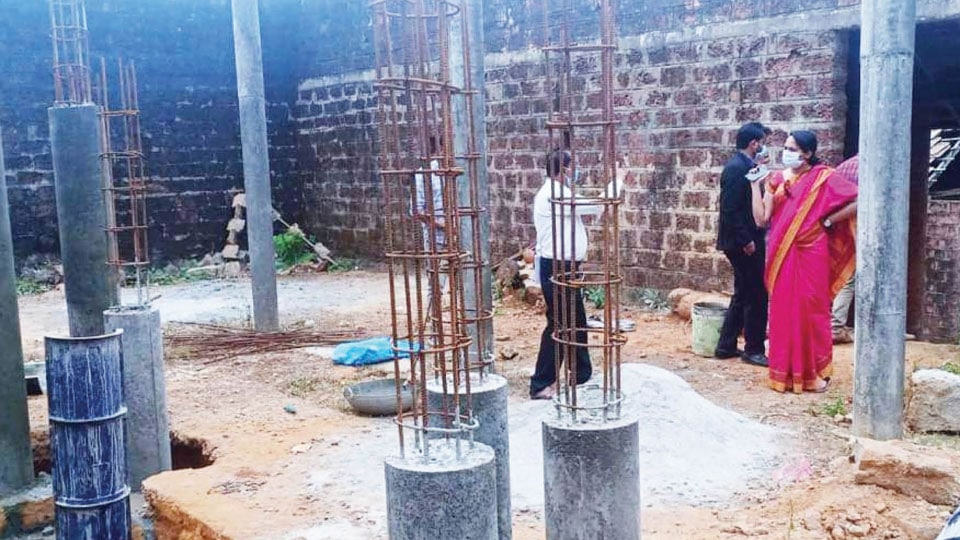 Madikeri:  With works on the ambitious Kodava Heritage Centre Project having recommenced after years of neglect, Kodagu Deputy Commissioner (DC) Annies Kanmani Joy visited the site on Thursday and reviewed the progress of work.

The Heritage Centre is coming up in a 4-acre land at Karavale Badaga village near Vidyanagar and close to Mahindra Holiday Resort, on the outskirts of Madikeri city.

The Kodava Heritage Centre envisaged by the Government in 2009-10 for introducing the unique Ainmane tradition of Kodavas with a Museum, was in limbo until recently. The Project features an Ainmane, a Hall, a small indoor water pond, an open auditorium, a Library, a Museum and drinking water facility.

The Public Works Department (PWD) has been entrusted with the task of executing the Project. The PWD had awarded the Rs.1.5 crore tender for completion of works to Madikeri-based Civil Contractor Kishore Babu.

The Project was launched on Sept. 21, 2011 and only the walls of the structure were built so far. There were complaints of poor quality work, while some others accused the authorities of improper planning and architecture. Over the years, the granite stones used for the steps have come apart and the incomplete walls have become dilapidated, unable to withstand the vagaries of nature.

Surprised by the undue delay in the execution of the Project, DC Annies Kanmani Joy, who is also Kodagu District Tourism Development Committee Chairperson, held a meeting on Sept. 6, 2020 during which she directed the officials to expedite the Project works.