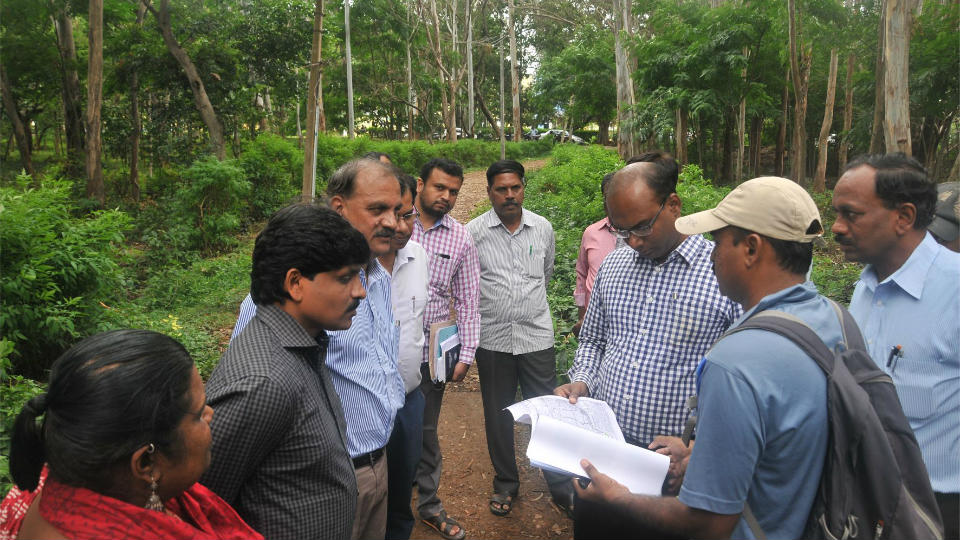 There are 13 inlets into the lake that have been blocked because of the wild growth of shrubs. The environmentalists and the morning walkers, who accompanied the DC and the Commissioner, pointed out that the UGD water is flowing into the lake, leading to its pollution.

The MCC has taken up the clearing of the growth, said the DC and added that he  has instructed the Kukkarahalli Lake Expert Committee to submit a pre-feasibility report within a week regarding setting up of a Sewage Treatment Plant (STP) at Kukkarahalli Lake and installing a 7.5 km pipeline to draw sewage water from Hebbal Industrial Area and surrounding areas to be treated at Kukkarahalli STP.

He also inspected the Kudaremala canal near the Fine Arts College bridge on Bogadi Road and said that efforts are on to clear the blocked canal so that the water can be released into the lake.

The Tourism Department had released Rs. 3 crore for the beautification of Kukkarahalli Lake out of which Rs 1.35 crore is used for fencing and construction of toilets for the walkers and the general public, said the DC.

DC visits malls: Later, DC Randeep and Tahsildar C. Ramesh Babu visited the new multiplexes coming up at Metagalli and near the Police Academy at Nazarbad. They found the entry and the exit  at the Metagalli mall narrow and asked the builders to increase the width and also make the parking space broader.