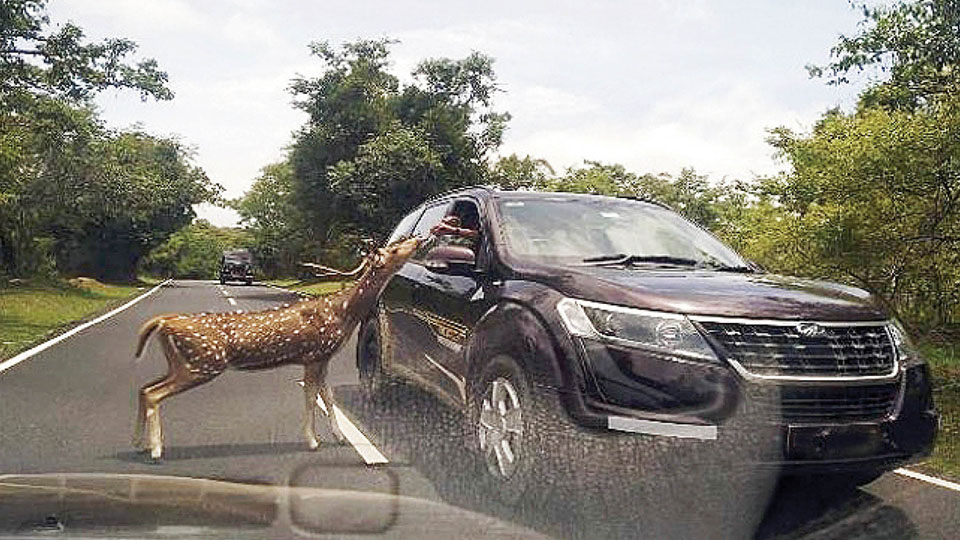 Mysore/Mysuru: A television journalist from a national channel was penalised for feeding a deer while driving along the Bandipur Tiger Reserve on Aug. 3. The journo has been penalised for violating rules under provisions of Indian Wildlife Act.

Despite installing warning boards at every kilometre all along the Bandipur Tiger Reserves, tourists stop their vehicles either to feed the wild animals, or take pictures or selfies.

A press release from the Office of Assistant Conservator of Forests, Gundlupet Sub-Division, stated that on Aug. 3 at 11 am, a tourist vehicle proceeding on the road that links Bandipur and Ooty was found feeding a spotted deer that was crossing the road. Occupants of a vehicle that was ahead of this particular tourist vehicle clicked the photo of feeding and uploaded the same on social media. Soon, the photo went viral and caught the attention of the officers of Bandipur Tiger Reserve.

The officers tracked down the vehicle and the person who fed the deer was identified as a journalist from New Delhi. He was summoned to the Tiger Reserve and was let off with a warning, after penalising him. The journalist admitted that he had violated the law and regretted the same.

Forest officers said that there were many incidents where wild animals were run over by speeding vehicles. Besides, motorists throw junk and other food items, posing a threat to the wild animals, which come in search of food on the roadsides.

“We have issued orders banning taking pictures in the wild, stopping vehicles and at the same time, we have installed signboards warning tourists to respect the wildlife as we are in their territory. Despite this, the rules are violated. We are levying a fine for tourists pulling over, getting out of their vehicles, clicking selfies, walking about and even feeding animals. They ignore signages,” a Forest Officer said.