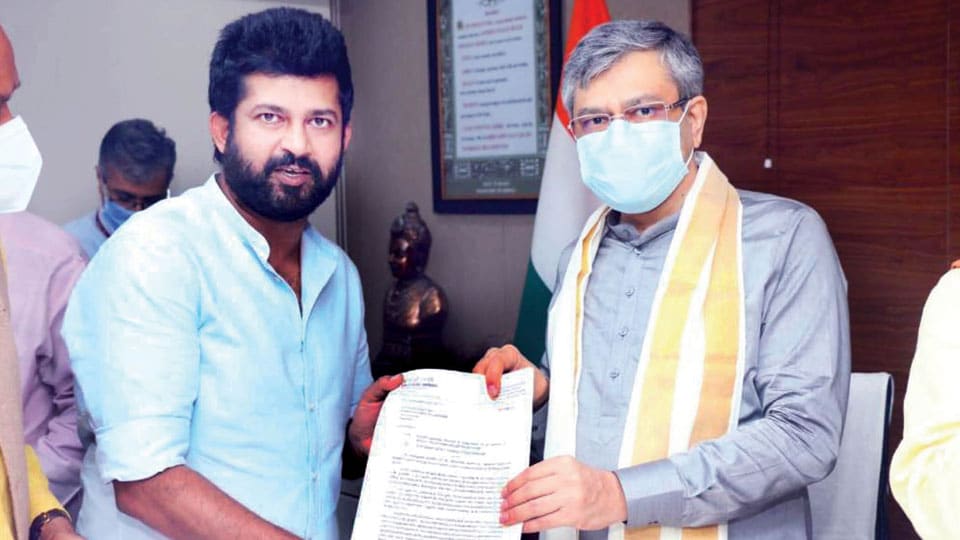 Mysore/Mysuru: The Detailed Project Report (DPR) for the Satellite Railway Terminal at Naganahalli by South Western Railways (SWR) is ready and has to be approved by the Central Railway Board.

The long-pending mega project that will benefit Mysuru in multiple ways was brought to the notice of Railway Minister Ashwini Vaishnaw by Mysuru-Kodagu MP Pratap Simha who urged the Minister to implement the project at the earliest.

The satellite terminal at Naganahalli was sanctioned by the Railway Board in 2018-19 with an estimate of Rs. 789.29 crore. A DPR for phase-I works at a cost of Rs. 495 crore was submitted to the Board in August 2019 and has been mentioned in the Railways Pink Book No. 448.

“I am given to understand that after techno feasibility study and cost benefit analysis by conducting engineering and traffic surveys, the Railways has decided to execute the work in two phases. The first phase proposes to lay 4 platform lines, 4 stabling lines and to maintain them together with station building at an estimated outlay of Rs. 496.29 crore,” the MP noted.

Pratap Simha has stated that farmers have agreed to part with their land for the project and even the State Government was interested in land acquisition. “A couple of meetings have already taken place between farmers and Revenue officials to set in motion the process of land acquisition. The land owners were assured of a fair compensation and their fears have been allayed,” he said.

“The Construction Department of SWR entrusted with the task of completing this project has stated that Infrastructure Development Department (IDD) of Government of Karnataka has not responded to their request for bearing cost of land (165 acres) at the rate of Rs.1.25 crores per acre,” Simha said.

He urged the Minister to bestow his personal attention on this critically important capacity building project and accord approval for the execution of the phase-I of the project.

The MP told the Railway Minister that though the Ministry of Railways sanctioned the survey work for laying a new broad gauge railway line from Mysuru to Madikeri via Kushalnagar, the project did not see the light of the day yet. This project was sought to be implemented in two phases — Mysuru to Kushalnagar (87.20 km) in the first phase and Kushalnagar to Madikeri in second phase (31.90 km).

Simha urged the Minister to issue directives to the Department concerned to swiftly process for obtaining requisite approvals for commencement of the project work in the current fiscal year.

Highlighting the reign of Nalwadi Krishnaraja Wadiyar from 1902 to 1940 as ‘Golden Age of Mysore’, the MP urged Rly. Minister to name the Mysuru City Railway Station after Nalwadi. Nalwadi set out on a mission to propagate the idea that Railways could break caste prejudices. Though rulers of Mysore opened first Railway line from Bengaluru to Mysuru (86 miles) in 1882, Railway development in the State was more significant under Nalwadi.

City Railway Station is a heritage building built during Nalwadi’s period. Besides, the Central Workshop at Ashokapuram was commissioned in 1924 for repair of rolling stock, the MP highlighted.  As per the existing guidelines, the Ministry of Home Affairs is the competent authority to approve change in the name of a Railway Station and for this, the Railway Ministry has to issue a ‘No Objection Certificate’ (NOC). The MP urged the Minister to issue the NOC and honour the sentiments of people of Mysuru.

Maharaja’s Saloon: The MP also urged the Railway Minister to return the ‘Maharaja’s Saloon’ that was donated to the National Rail Museum, New Delhi, from the Mysuru Rail Museum. “The Maharaja’s Saloon originally belonged to Mysuru and at present, only a part of the Royal Train remains in Mysuru,” the MP noted.

“Maharaja’s Saloon is a classic example to demonstrate the contributions of the Wadiyar dynasty for the development of Railways in Mysore Kingdom from 1864-1950. It becomes our responsibility to preserve their legacy for the present and future generations to appreciate,” Pratap Simha stated.