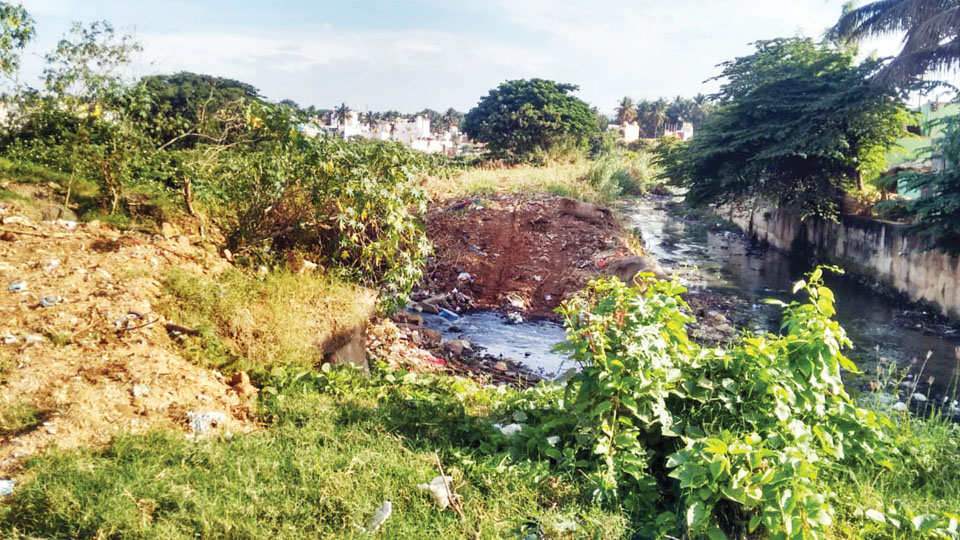 Devanur Lake that is beautifully located on the main link road between N.R. Mohalla and Rajivnagar has become an eyesore and is no more than a sewage dump, full of weeds and silt. Pigs, dogs and other stray animals are having a great time feasting in this Lake.

Continued discharge of sewage from northern and eastern parts of the city into the water body has turned the water body into a major health hazard. While local residents allege that the Lake continues to become the victim of neglect and the resultant encroachments, a Detailed Project Report submitted three years back by Mysuru Urban Development Authority (MUDA) to rejuvenate the lake to the Lake Development Authority through Minor Irrigation Department is gathering dust.

The Lake, situated between N.R. Mohalla and Udayagiri, and 2km from Narayana Multispeciality Hospital on Outer Ring Road, was once spread over 12 acres of land providing water for irrigation in the region.

Layouts have come up in the encroached land estimated to be a four-acre plot. This apart, sewage water from Ghousianagar, Gayatripuram, Muneshwaranagar, Sathagalli, Shanthinagar, Udayagiri, Rajivnagar, N.R. Mohalla, Jalapuri, Kalyanagiri and surrounding areas, which are discharged to the storm water drain, are directly released to the Lake.

A group of civic-conscious local residents had formed Save Devanur Lake Committee and had carried out many campaigns and protests to prevent encroachments and dumping of sewage but their voices fell on deaf ears. Committee members Mohammad Azhar and Zaheer said that the clear Lake water once attracted migratory birds but gradually got polluted after sewage water from surrounding areas was released into it.

The sewage includes waste from local slaughterhouses that have resulted in the Lake turning into a malodorous cesspool. “It has become a breeding ground for mosquitoes and the threat of dengue and chikungunya is constant,” they said.

The Mysuru City Corporation (MCC) had taken up conservation work on the Lake years ago at a cost of Rs. 5 crore with the funds allotted under CM’s grants  and though the tender was allotted, the contractor abandoned the project and claimed that desilting the lake was not possible and would consume more than the money sanctioned.

Owing to encroachments and Lake turning into a landfill for garbage and construction debris its storage capacity has been severely reduced. Earlier, the feeder canals used to bring fresh water to the Devanur Lake and now they bring sewage thanks to unbridled urbanisation.

Lake handed over to MUDA

When Rs. 5 crore was allotted by CM’s Fund, a sewage treatment plant was proposed to be set up on the lake-bed to treat the sewage mixed with water in the storm-water drains but the contractor abandoned the project midway on the grounds that it was unviable. Also, the report produced by the MCC to avail the CM’s grants was full of  loopholes.

As such, in 2015, the then Deputy Commissioner C. Shikha had recommended the MCC Commissioner to take disciplinary action against the engineer who prepared the report with gaps and hand over the responsibility of maintaining the Lake to MUDA. Even then, development and rejuvenation works were not initiated leading to protests.

Later, MUDA engaged Jalavahini Management Services Pvt. Ltd. to prepare a Detailed Project Report (DPR). The agency prepared a Rs. 17 crore worth DPR and the same was handed over to the Minor Irrigation Department three years back and was later handed over to the Lake Development Authority.

Nothing is forthcoming from the Lake Development Authority and a few MUDA officials admit that the Authority has not acted on the DPR. “We have written to the Lake Development Authority many times but paucity of funds is said to be the reason for delay and the Finance Department has to sanction funds. But MUDA has already sanctioned Rs. 1 crore to demarcate and protect the boundaries and 12-acre 37 guntas land has been identified and demarcated,” said a MUDA Officer.

He added that the MUDA has prepared an estimate to fence the Lake and tenders would be issued soon.

Speaking to Star of Mysore, naturalist, water conservationist and wetland specialist U.N. Ravikumar, who had proposed the rejuvenation of Devanur Lake in early 2000, said that nothing concrete has been done to bring the Lake alive though public money has been spent in the name of rejuvenation. “In 2000, the Asian Development Bank (ADB) was to construct the Ring Road above the Lingambudhi Lake and we had opposed it. We convinced the ADB about saving the water body and the decision came in our favour and the Ring Road got diverted. The ADB later came forward to develop five lakes in Mysuru as the civic consciousness about water conservation in Mysuru was high,” he said.

Ideas to rejuvenate five lakes including the Devanur Lake were given to the ADB as it was a good opportunity to revive the Devanur Lake located in a densely populated area. “Since then a lot of proposals were floated but nothing on the ground was implemented. Huge amount of public money was spent but nothing comprehensive was achieved,” Ravikumar regretted.

“Many Government agencies came up with their own ideas and proposals but none of them were implemented and the Lake continues to get sewage. The Lake upstream is sloped gradient and water can easily flow.  But at present, instead of rainwater flowing into the Lake, sewage flows. And unfortunately, there is no place to treat the sewage water and the Lake is being choked,” he regretted.