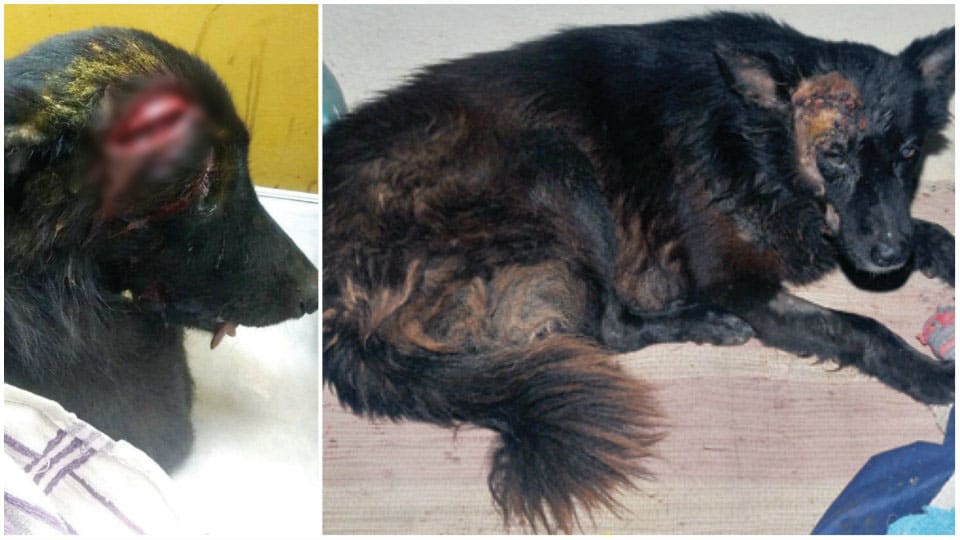 Mysuru: The N.R. Police have registered a case against the man who had brutally attacked a dog and tried to kill it on June 25. Steps are being taken to arrest him as he is absconding.

Zulfikar, 26, had attacked the dog Jimmy belonging to Arokya Mary, resident of N.R. Mohalla, A.J. Block on Sunday badly injuring it. Just because the dog had barked at him, he was so incensed that he came back walked up to the terrace of Mary’s house where Jimmy was tied and slashed it’s neck, jaw and head with the meat cleaver.

The pet dog’s owner Mary had taken the profusely bleeding Jimmy to The Woof Wagon Veterinary Clinic and Pet Resort in Dattagalli and got it treated by Dr. Suranjan Ganguly and Dr. Shantanu Kalambi. Based on the complaint by Arokya Mary, the N.R. Police have registered a case under IPC Section 427 (causing damage to property), Section 448 (house trespass), Section 429 (Mischief by killing or maiming cattle or any animal) and Section 506 (Punishment for criminal intimidation) against Zulfikar and are on the lookout for him.

Dog recovering: Jimmy is said to be responding well to the treatment after the doctors had put suture on it. It is going to recover soon, the doctors have said.

Social media criticises: The social media is aghast at the brutal attack on the dog Jimmy. The animal-lovers are questioning Zulfikar, the attacker, for his inhuman attack on a mute animal and demanded stringent action against him. People from Mysuru, Mandya, Chamarajanagar have called this newspaper and expressed their anguish and anger against him.