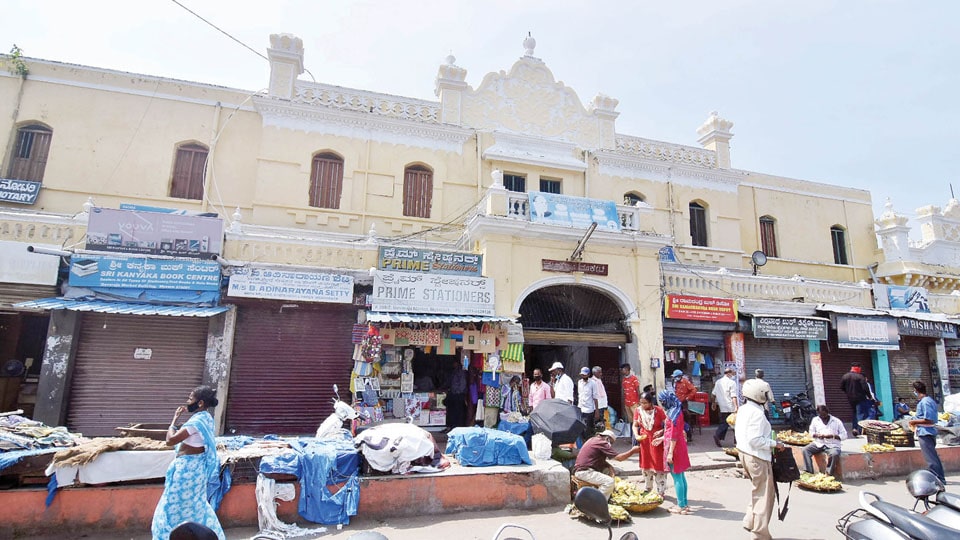 Mysore/Mysuru: The Mysuru District Heritage Committee that met at the Deputy Commissioner’s (DC) Office yesterday under the leadership of DC Dr. Bagadi Gautham, who is also the Chairman of the Committee, has taken a decision to demolish the Devaraja Market and Lansdowne Building and reconstruct them by retaining their original design, facades and the heritage style.

The decision has been taken on the grounds that both the buildings are structurally weak and would pose a threat to public safety. Already a couple of lives have been lost, the DC told Star of Mysore this morning.

While the Task Force appointed by the State Government had recommended demolition of both the buildings, the Heritage Committee earlier had opposed it contending that it was possible to undertake repairs without demolition. Now, a case is pending before the High Court as some tenants had appealed against the demolition. Hearing the tenants, the Court had sought the Committee’s opinion.

Some of the members of the Heritage Committee opposed the demolition and said that the Committee, by deciding on demolition, has just endorsed the decision of the State Government which has already made up its mind to raze both the heritage buildings. “As the High Court has asked the opinion of the Committee, a formality has been completed, toeing the Government line,” said the members, voicing their dissent.

Those members who opposed the demolition highlighted Prime Minister Narendra Modi’s speech at the All-India Mayors’ Conference at Varanasi in December last year following the inauguration of the Kashi Vishwanath Dham project where he appealed to all Mayors not to demolish heritage buildings. The PM had urged them to rejuvenate heritage structures by infusing new life.

However, as a majority of the Committee members felt that demolition was the only alternative, a decision was taken in favour of demolition. Also, the Committee did not meet with its full strength as there were many absentees too and the dissenters were in minority.

It may be recalled here that while speaking about the renovation of Rajendra Vilas Palace atop the Chamundi Hill recently, member of erstwhile Mysore royal family Pramoda Devi Wadiyar had said that Mysuru is a heritage city and tourists come here to see the heritage structures.

“But if you raze these heritage structures and construct heritage-like structures, there is no meaning for a heritage city,” she had said, offering to take up renovation under ‘His Highness Srikantadatta Narasimharaja Wadiyar Foundation’ if the Government takes a decision.