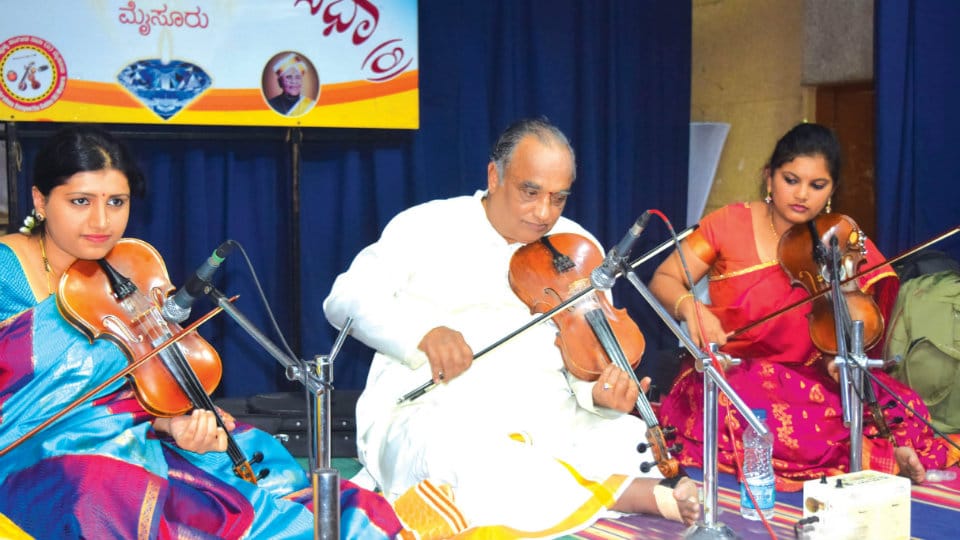 In memory of Sangeeta Ratna T. Chowdaiah, Nadabrahma Sangeeta Sabha felicitates a senior violinist on the 19th of January every year. This is the day Chowdaiah breathed his last and on his death anniversary, his family, in collaboration with the Sabha, honours a senior Violin Vidwan with the title ‘Dhanurvainika Brahma’ and a concert by the honoured is arranged following the felicitation.

Contributing with their expert skills

HKN is not only a top ranking Violinist but is also a great teacher who has produced several first rate violinists. The soul searching violin recital at the event with Sindhu and his granddaughter Pruthvi featured rare and popular ragas keeping the audience intact. The trio was supported on the mridanga by Ramanujam and on the ghata by Sharat Kaushik. With all the performers on the stage being Mysureans, it was a pleasure indeed.

Rising to the occasion, the trio played Chowdaiah’s ‘Prasanna Ganapate Pahi’ in Bahudari set to Rupaka tala. Lively swaras were knit for the pallavi. A brief sketch of Kanada led to Swati Tirunal’s ‘Mamava Sada janani’ in Kanada. HKN magnanimously let the girls play more and when Pruthvi developed Kumudakriya beautifully, his face was seen lighting up with pride.

‘Deekshitar’s ‘Ardha Nareeshwaram’ was played with all grandeur. The raga is attractive and the composition absorbing and the rendition was so synchronised that the audience swayed in delight.

The other highlight of the evening was Kambhoji, which Sindhu was allowed to play. Sindhu essayed the raga exhibiting aesthetic nuances. ‘Shri Raghuvara Aprameya mamava’ by Tyagaraja in Adi Vilamba was rightly presented in an unhurried manner, enhancing the beauty of the composition with swaras to the pallavi. Each of the artistes contributed with their expert skills. Ramanujam’s proficiency on mridanga along with Sharat’s ghata made the concert appealing.

The lighter pieces towards the end of the concert included Purandara Devara nama ‘Hari Chitta Sathya’ of Bombay Sisters fame in Jonpuri and the very popular  ragamalika ‘Baro Krishnayya’ by Kanakadasa.

Through the concert, the three artistes enjoyed each other’s music. More important, each adapted seamlessly to meld with the other’s genre.