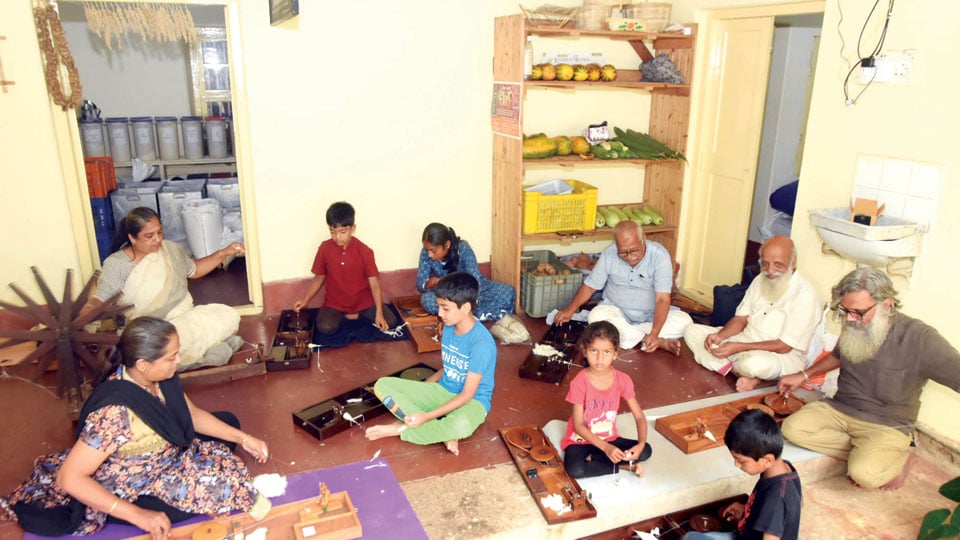 Mysore/Mysuru: As a precursor to ‘Dhwaja Satyagraha’ to be held on July 30 at Subbarayanakere, a group spinning session ‘Let’s Spin’ organised by Khadi Nulugarara Balaga, Mysuru, was held at Prakriti, Krishnaraja Boulevard, Chamarajapuram here this morning.

Theatre personality and social activist Prasanna said that as per Rule 1.2 of Part 1 of the Flag Code of India 2002, only Khadi or hand-spun cloth was the material for the flag. “Use of other materials was not allowed. But the recent amendment has changed where the National Flag can be made of hand-spun and hand-woven or machine-made, cotton, polyester, wool and silk Khadi bunting which is not acceptable.”

Pointing out that the Flag Code amendment allows the machine-made polyester that is made in India or imported from elsewhere can be used to prepare the Indian flag, Prasanna said that the Government does not need the contributions made by farmers, spinners, villagers, women and poor anymore but are running behind MNC companies who make huge profit in the country’s economy.

“Condemning all this a ‘Dhwaja Satyagraha’ will be held on July 30, a fortnight before Independence Day this year at Subbarayanakere,” Prasanna said.

At today’s event, children and others took part in the group spinning session after the meeting. Balaga members Sachidananda, Balachandra, Santhosh, Sowmya, Rajani, Gowri and others were present.