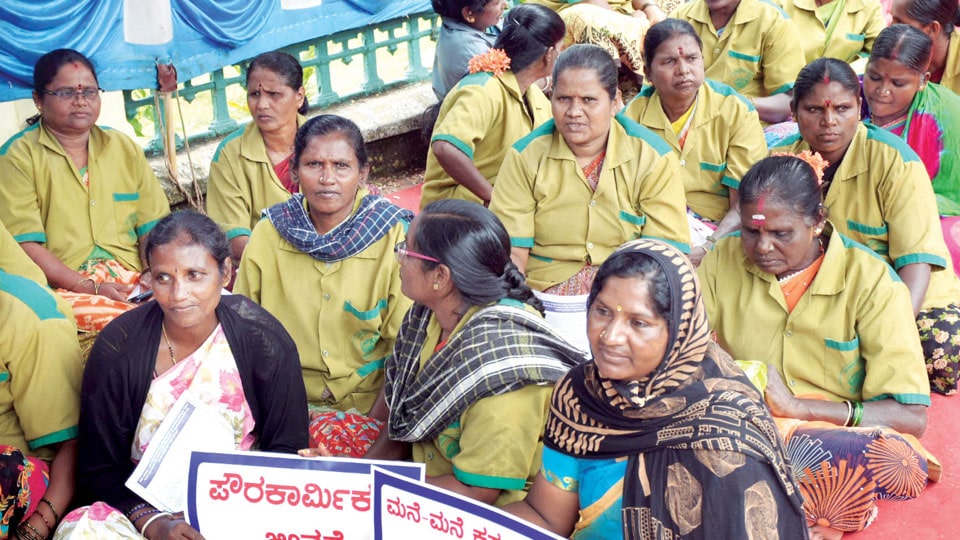 Mysore/Mysuru: The indefinite stir launched by Direct Payment System Pourakarmikas of Mysuru city Corporation (MCC) in front of the MCC main office on Sayyaji Rao Road,  seeking regularisation of service and fulfillment of other demands, entered the third day today, badly affecting waste collection and disposal, cleaning activities and such other civic  works in the city.

The stir was launched on July 1, with direct payment Pourakarmikas absenting from work, in response to the Statewide stir called by Karnataka State City Corporations, CMCs and TMCs, contract and direct payment pourakarmika and Waste Disposal Vehicles Drivers Association.

Addressing the protestors this morning, MCC Pourakarmika Association President N. Mara said that Chief Minister Basavaraj Bommai is expected to announce the Government’s decision on resolving the issue by tomorrow evening. If the Government decision is not favourable, then the Contract Payment System Pourakarmikas, along with regularised Pourakarmikas will strike work from July 5, thus bringing a complete halt to all civic works.

Pointing out that there are as many as 1,648 direct payment system Pourakarmikas, 385 door-to-door waste collectors and 231 sanitation workers attached to the MCC, Mara said that tomorrow (July 4) morning, the association leaders will visit all the 65 wards of the MCC and seek the support of  regularised Pourakarmikas, who have continued to work. They will also be asked to stop work from July 5 and join the ongoing indefinite stir, he said adding that the stir will be intensified if the Government does not consider the Pourakarmika  demands.