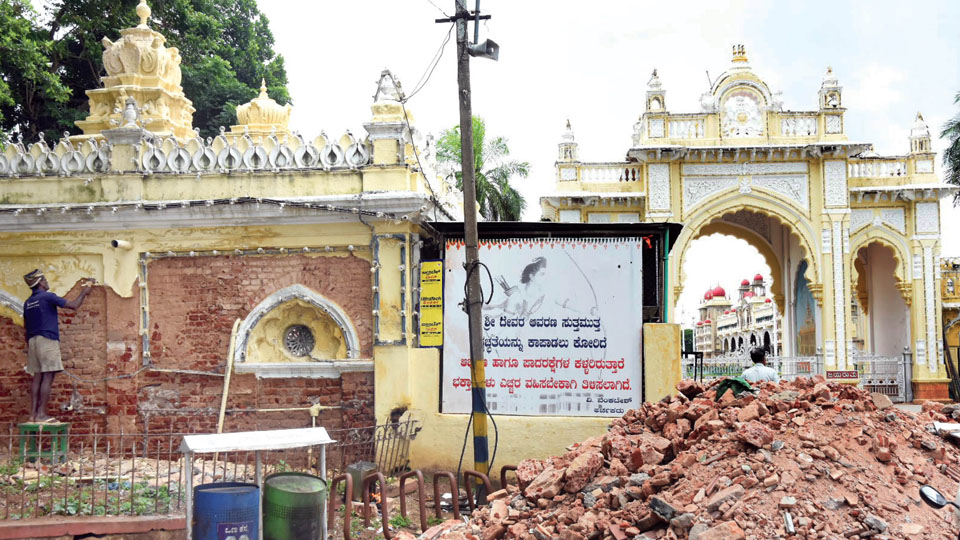 Mysore/Mysuru: There is a desperate need to save historical, cultural and heritage-value structures in Mysuru city that are in dilapidated condition as there is a danger of them meeting the fate of structures like Lansdowne Building, Devaraja Market, V.V. Market and the Fire Brigade Office where neither the Mysuru City Corporation nor the State Government has been able to take a decision on conservation and restoration.

Instead, the authorities are in favour of demolishing the structures and rebuilding them in a ‘heritage-like’ manner, much to the chagrin of heritage experts, stakeholders, the public and the Mysore royal family.

In such a scenario, the repair and restoration work that has been taken up at the 102-year-old City Police Commissioner’s Office at Nazarbad at a cost of Rs. 64 lakh without disturbing its heritage and architectural aspects comes as a ray of hope to heritage structures.

The restoration of the old City Police Commissioner’s Office is being done by the  Department of Archaeology, Museums and Heritage which has simultaneously taken up the restoration of the Sri Chandramouleshwara Swamy Temple building located near the North Gate (Balarama-Jayarama Gate) of the Mysore Palace.

The temple comes under the administration of the Muzarai Department and is in a dilapidated state. The ceiling has given away in many places and the plastering of the parapet wall surrounding the temple too has chipped away at many places, exposing the inner brickworks. Due to incessant rains, the structure was continuously leaking, loosening it further.

Realising that the building would collapse if urgent repairs are not done, the Department of Archaeology, Museums and Heritage has taken up the restoration works. As it is a heritage structure, the repair and restoration works are being carried out after seeking suggestions from heritage experts and even the works are being carried out by workers who have experience in doing such skilled work.

The Muzarai Department has released Rs. 16 lakh for the restoration works and an estimate has been prepared for Rs. 13,29,397 and accordingly, the tenders have been called. Conservation engineers from the Department of Archaeology, Museums and Heritage have begun the works on June 24.

READ ALSO  At last, a solution to manage building waste on the anvil

The first instalment of Rs. 4 lakh has been released and with this, the Madras roof of the temple is being levelled with weather-proof concrete and a facility is being created for rainwater to flow smoothly. Yelahanka tiles will be fixed later.

Paving, pointing and the works of the parapet wall and gopura will be taken up, walls will be strengthened and plastered new. Officials said that the renovation works are being taken up with the materials used in the earlier years and there will be no change in their composition. The renovation works are undertaken under the supervision of the In-Charge Commissioner of the Department of Archaeology, Museums and Heritage B.R. Poornima and will be completed in four months. The works  are being executed by Conservation Section Assistant Executive Engineers C.T. Mahesh and Pramod, Junior Engineers Satish and FDA Anil Kumar.

2 COMMENTS ON THIS POST To “Amid talks of demolishing & reconstructing Devaraja Market, Lansdowne Building… Two buildings to be renovated”