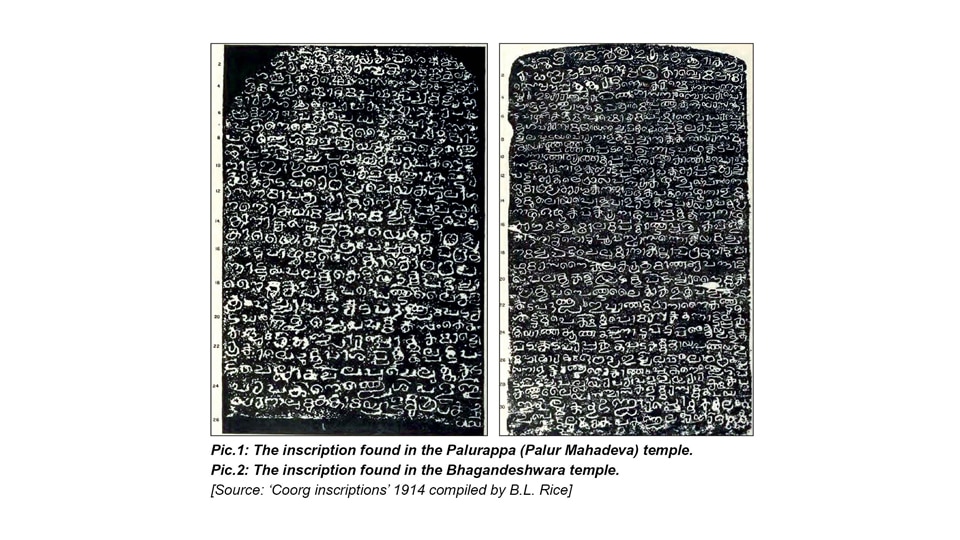 In his 1914 revised Coorg Inscriptions volume of the Epigraphy Carnatica book series, B.L. Rice has listed two peculiar 14th century inscriptions. These were deciphered for Rice by Narasimhachar and Krishna Shastri. Many have dismissed the inscriptions to be a mixture of scripts and languages. It beats logic for an inscription to use a mixture of languages rather than a single language itself.

I have managed to separate the characters in the inscription and group them into an alphabet. The alphabet is midway between an intermediate transitional ‘Grantha’ script and the ‘Tulu-Tigalari’ script. It is related to the 14th century Tamil letters. Since the two inscriptions were found in two prominent temples of Kodagu, I would prefer to call the script ‘Thirke’, after the Kodava word for a temple. An online organisation called ‘Indian Roots Polyglots’ calls this “old Kodava script.”

Narasimhachar had noted in the ‘Coorg Inscriptions’ that the 14th century inscriptions’ “characters are a jumble of Grantha, Malayalam, Tamil and a few Vatteluttu. There is no doubt about portions being in Tamil, but other portions are in a language that is neither Malayalam nor Tulu but is related to them. I think the inscriptions are older than 1400 AD. Some of the characters appear to go back to the 11th century.”

The Kodava language is the descendant of the Tamil-Kodagu branch of the Dravidian language family. Tamil-Kodagu is older than Tamil-Malayalam, the parent of the Malayalam language.

The ‘Brahmi’ script was used all over ancient India. Variants of it were used in South India. There were the ‘Kadamba’ and the ‘Pallava’ scripts, named after ruling dynasties of their ages. The Kadamba script gave rise to the Kannada and the Telugu scripts. The Pallava script gave rise to Tamil and Grantha. These in turn were related to the ‘Vatteluttu’ and the ‘Tulu-Tigalari’ scripts. The ‘Tulu-Tigalari’ script itself is a descendant of the ‘Grantha’ script.

However, neither is the ‘Thirke’ (or old Kodava) script itself modern ‘Tulu-Tigalari’ nor is the language used modern Kodava. The Kodava and the Tamil languages don’t have long consonants, unlike most other Indian languages. But the old Kodava script itself has a few long consonants. We can safely say that the language used is a lost language that was an ancestor of or at least related to the modern Kodava language.

Like in the ‘Tulu-Tigalari’ and other related scripts, some letters in this ‘Thirke’ (old Kodava) alphabet (such as ‘cha’, ‘pa’ and ‘va’) are like each other and may be mistaken for each other. ‘Ta’ and ‘da’ are interchangeable in this script, like in old Malayalam. Hence, ‘Nadu’ is sometimes called ‘Natu’ in the two inscriptions.

Meanwhile, in the Palace Garden of the Heggade rulers of Vitla is a stone pot with an inscription. P. Gururaj Bhat had claimed that the script was Tulu and the language Kodava. The script used is not the same as the one used in the two 14th inscriptions of Kodagu. Recently, it has been found that the Vitla Palace inscription actually uses the Malayalam script and language.

The earliest inscriptions found in Kodagu date back to the 9th and 10th centuries and are in Kannada. An 888 AD stone inscription found in Biliyur village mentions a ‘Kadanga’, a defensive earthwork barricade against enemy soldiers and elephants unique to Kodagu and made by the Kodavas.

The same inscription, along with a few later ones, mentions the ‘Entu Okkal’ or the eight householder families, who held some power in the region. An ‘Okkal’ is a land-owning agriculturist family. It corresponds to the Kodava word ‘Okka.’ These eight families could correspond to the eight ‘seeme thakkas’ (regional chieftain families) of Kodagu — eight hereditary chieftain families (Kallera, Bollera, Pardanda, Pandira, Mathanda, Buduvanda, Porera and Paruvanda).

The two 14th century inscriptions of Kodagu are dated around 1370-1371 AD. Both state that the king or overlord is ‘Bodharoopa Bhagavar’ who issued the two edicts. The Bhagamandala inscription mentions that the ruler of that ‘nad’ (region) is Melpundi Kunniyarasa. The name Kunniyarasa means ‘little ruler.’

The two inscriptions were found in the Bhagandeshwara Temple of Bhagamandala and the Mahalingeshwara Temple of Palur. Both temples are Shaiva temples. Both the inscriptions begin with the Sanskrit words ‘Svasti Sri’, which mean ‘Be it well’. This is similar in meaning to the term ‘Baalo’ with which most Kodava folk songs begin.

Edicts of  Bhagamandala and Palur

The Bhagamandala edict goes as follows. On a Friday, when Jupiter was in Virgo, during the month of Scorpio, the Bhagamandala inscription is created. A penalty is stated for stopping the daily expenses. Even the ruler Kunniyarasa is not spared of this penalty. Curses are placed upon those who don’t pay for the daily expenses of the temple. Even if the king doesn’t punish one who doesn’t pay, he is to be cursed by the people.  The ‘arm-bearing thousands’ (soldiers) of the 18 regions and merchants are to protect the temple. Blessings are pronounced upon the ascetics and the king. A mention of a copper plate and a treasury register (both of which went missing over the centuries) is also made.

The Palur edict begins with a prayer to Vinayaka (Ganesh) and Saraswathi.

‘Bodharoopa’ is mentioned to be the disciple of a particular guru and to have made the stone inscription to the Mahadeva (Shiva) of Palayur. A curse is pronounced upon those who don’t pay for the daily expenses. The edict is made for the Srivaishnava, the merchants, the arm-bearing thousands, and the Brahmans of the 18 regions who may see and maintain it. The merchants will read out loudly the daily expenses once a year and check the temple accounts. This edict is unsigned, unlike the Bhagamandala one.

It is interesting to note that Kodagu has a community of Kodava speaking smiths called the ‘Airi.’ The word ‘Ayari’ seems to indicate that the word ‘Airi’ arose from the term ‘Achari.’ Hence, the title ‘Pakandala Ayari’ could simply mean, the ‘Airi from Bhagamandala.’