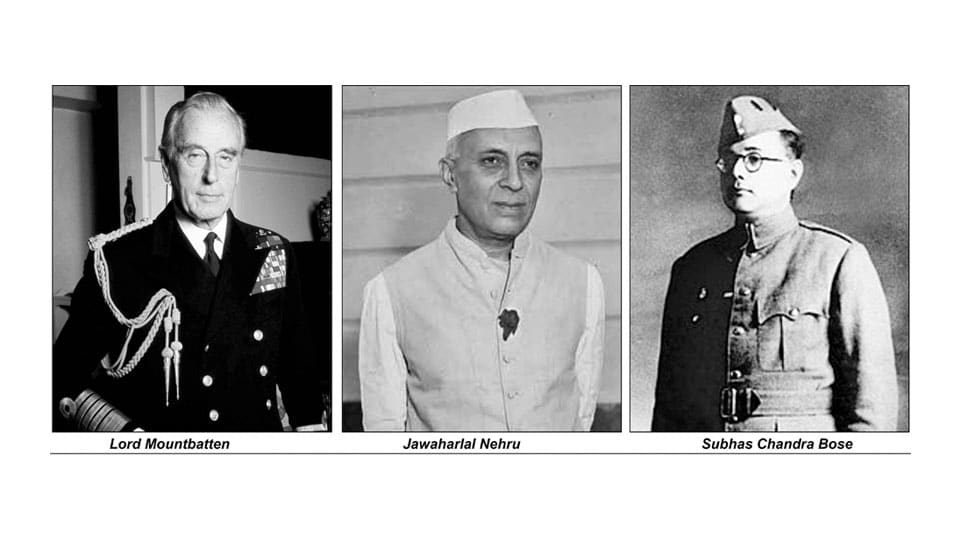 Some intellectuals are of the opinion that we must trust people and take their advice. Dr. U.R. Ananthamurthy was one such intellectual. In one of his Durbars with his courtiers he was asked what should be done when they are cheated going by their advice. Dr. Ananthamurthy’s answer was to the point: ‘Well, first verify and then trust.’ Well said, but this approach in dealing with friends and VIPs is mired in self-doubt. ‘What would the friend or the VIP think of me? So I will trust them and go according to their advice.’ Let me give one example. Our first Prime Minister Jawaharlal Nehru was a victim of such trust and advice.

This is what happened to our first Prime Minister, refined and sophisticated, a philosopher-statesman-politician, at the time of making a decision about taking back militarily the PoK, in October 1947 and also in the matter of Hyderabad and even Goa.

In the matter of Kashmir and Hyderabad, Nehru trusted his friend and Governor General of India at that time, Lord Mountbatten, took his advice and made India suffer. Obviously Nehru did not verify the credentials of the Englishman.

As a democrat and a secularist, Nehru went with the Congress Working Committee’s (CWC) majority decision ignoring Mahatma Gandhi’s objection to the partition of the country and also of Jayaprakash Narayan, Maulana Azad and Abdul Ghaffar Khan. Of course, there was no national debate on the partition of India as any Indian would have expected.

Nehru and his advisers had agreed for plebiscite in J&K simply because, at the Security Council, Pakistan’s skilled Foreign Minister Sir Muhammad Zafarullah Khan questioned the validity of Kashmir’s accession to India. Nehru’s men in the Security Council could not counter this illegitimate argument of Pakistan. Yes, there were conditions for holding the plebiscite but neither party fulfilled them and the question of plebiscite made mere noise in the successive Security Council meetings and nothing more.

Be that as it may, I read an interesting episode involving Nehru and the American President Harry Truman, as recorded by Dore Gold, former Israel’s Ambassador to the United Nations, in his book ‘Tower of Babble’. He writes that according to Nehru, J&K was more than a territorial dispute. When we  see what has been happening in J&K since then, including the fate of Kashmir Pundits and other minorities, Nehru’s apprehension  seems to be correct.

“In a meeting with President Harry Truman in October 1949, Prime Minister Nehru frankly admitted that determining the fate of Kashmir “on a religious basis” would be destabilising for India, for it “would have a deeply unsettling effect upon the Muslims living in India.” Nehru realised that if Kashmir was excluded from India simply because it had a Muslim majority, Indian Muslims would experience doubts about the Government’s commitment to Secularism. In short, the Kashmir dispute touched on the very foundations of the Indian State as a Secular Nation.”

In other words, Nehru, as a visionary leader, foresaw then the possibility of the “deeply unsettling effect upon Muslims living in India” if the fate of Kashmir was determined “on a religious basis.”

If this was the line of thinking of Nehru about Kashmir, how could he have “messed up” the Pakistani aggression by going to the UN instead of finding a military solution as advised by his Generals and why his representatives in UN Security Council treated the complaint as a “dispute” and not as an “aggression”? India should have asked the UN for relief by asking Pakistan to first vacate the aggression. Here is what Dore Gold writes and we cannot blame Nehru:

“Since Pakistani forces were involved in a conflict on Indian territory, Nehru considered expanding the confrontation into a full scale counter-attack against Pakistan. But Lord Mountbatten (Governor General of India then and also Nehru’s close friend) persuaded him to go to the UN instead. He convinced Nehru that the UN would promptly direct Pakistan to withdraw the raiders who had invaded Kashmir. So on January 1, 1948, India turned to the UN Security Council.”

Sadly India got damned. Nehru who trusted his friend Lord Mountbatten and political colleagues, without verifying their motives or intentions, was disillusioned. The motives of British and US were suspect as they did not want to displease the Muslims in Middle-East where they had just then divided Palestine. Apparently, Lord Mountbatten loved his country more than his friend Nehru and India!

These are my thoughts for the Republic Day gleaned from books written by those who participated in the happenings or in the know of history.

As I was watching TV channels last evening at 6 with Prime Minister Narendra Modi unveiling the hologram statue of Netaji Subhas Chandra Bose near India Gate, I was reminiscing about India’s march before Independence.

There were many freedom fighters of differing ideologies to throw the British out. The most important among them after 1930 were Mahatma Gandhi who pioneered peaceful, non-violent path to achieve freedom, Pandit Jawaharlal Nehru, a moderate and Gandhij’s blue eyed boy, Sardar Vallabhbhai Patel and, of course, last but not the least Netaji Subhas Chandra Bose, the radical who decided to fight the British with his Indian National Army (INA) with the support of the Axis powers in the II World War, specially Japan.

When the British handed over power in 1947 to the Congress after a bloody division of the country (where did the peace go all of a sudden?), the nation was given the impression that it was Congress party led by Gandhiji, Nehru and those few on the ship of Congress who got us the freedom and others were forgotten. There was no effort on the part of the Nehru (or Congress) government for the next many decades, till 2014 when Modi came to power, to tell the new generation of Indians about others who fought for freedom and even gave their life. Netaji was one such tall leader who was ignored by the Congress.

I am so happy Netaji could find his place in Delhi, if not as the Prime Minister, but as a national icon and fortuitously his statue replaces that of the British King George V. Is there a symbolism here?

It appears, that after removing the statue of King George V, the Congress wanted either Nehru’s or Gandhiji’s statue to be placed there! Though, they  had many statues already. If Congress had won the 2014 election, sure Nehru would have been there under that canopy. Bad luck for the dynasty. Well, may be God has his own way of rewarding the deserving in any walk of life.

By the way I had the rare opportunity to visit Netaji’s memorial in Tokyo, Japan, where I stood in silence for a while as my inner voice whispered: This was the man who fought the mighty and gave his all for my country’s today and tomorrow.

Let me remember his clarion calls those days — Give me your blood, I will give you freedom.

The patriotic slogan, Jai Hind, was also coined by Netaji.