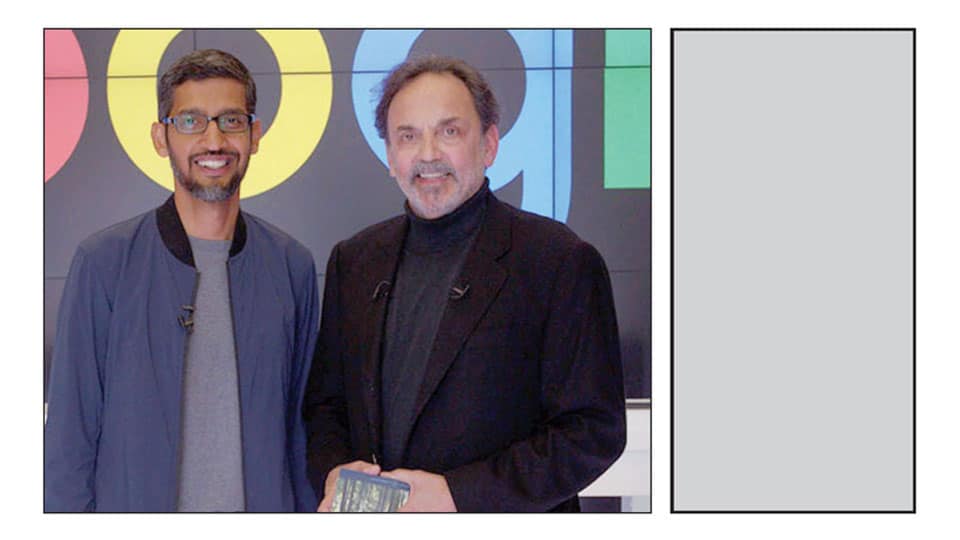 If you have never been in jail then you can never get a Government job. But, a politician could have been in jail any number of times and then also he can become the Prime Minister or the President.

You have to be a graduate to get any ordinary job in a bank. But, if a politician is illiterate still he can become India’s Finance Minister.

If you feel that this system needs to be changed, then support by spreading this    message.”

– A WhatsApp message with a title “The irritated Indian” with the stamp-size pic of Sundar Pichai and dated 13th October.

Recently, while scrolling English TV news channels I ran into an interview of Sundar Pichai, who has done we Indians proud by rising to the dizzy-height as Google CEO, by NDTV Boss Prannoy Roy.

The interview was held at the Googleplex in California and it interested me because in that all-embracing interview, Prannoy Roy had covered varied important and germane subjects in the present digital world that touch everyone of us in our day-to-day life. Sometimes to our own good and sometimes to the good of the State at the cost of our freedom and rights.

The quality of the interview is enhanced further because Prannoy Roy was able to extract from Sundar Pichai the future shape of things to come which will define the future of the humanity, specially in the matter of health, communication and social intercourse leaping into the new world of ‘ambient computing.’ A machine or call it Robot “which will work for you while you lead your day-to-day life” according to your choice.

I would think this ultimate freedom of choice and action is similar to what the Spiritual Masters call liberation or enlightenment while still here on earth.

It is generally observed about successful people that they were either eccentrics with their own idiosyncrasy or those who have failed either in their chosen field of activity or slightly nasty in their early days as students or a dropout. It is in this context Prannoy Roy expresses his surprise at the meteoric rise of Sundar Pichai comparatively at an young age. After all, Sundar Pichai does not fit into the old mould generally perceived by the people as expressed by Prannoy Roy.  As we know Sundar Pichai was not a dropout, he was a good guy. No wonder, Prannoy Roy asks him, “Don’t you have to be  slightly nasty to be successful?”

Well, Pichai seems to be a good role-model for all those who carried the wrong impression that to be successful one has to be a dropout or nasty! Even a good guy can be successful. Pichai himself has said this in his own beautiful way: “I have always felt being good guy and doing well aren’t necessarily at odds with each other.”

Prannoy Roy mentions about the food courts in the Google campuses with admiration and Sundar Pichai agrees and talks about the special dish called ‘Google 15’ and adds “when you join Google, within the first year people tend to gain about 15 pounds.” The first sin!

The question, according to Pichai, is: Do we end up developing something we cannot control? Indeed, there is a deep real concern. Fortunately, Pichai says AI is still far away, at least another 20 years. 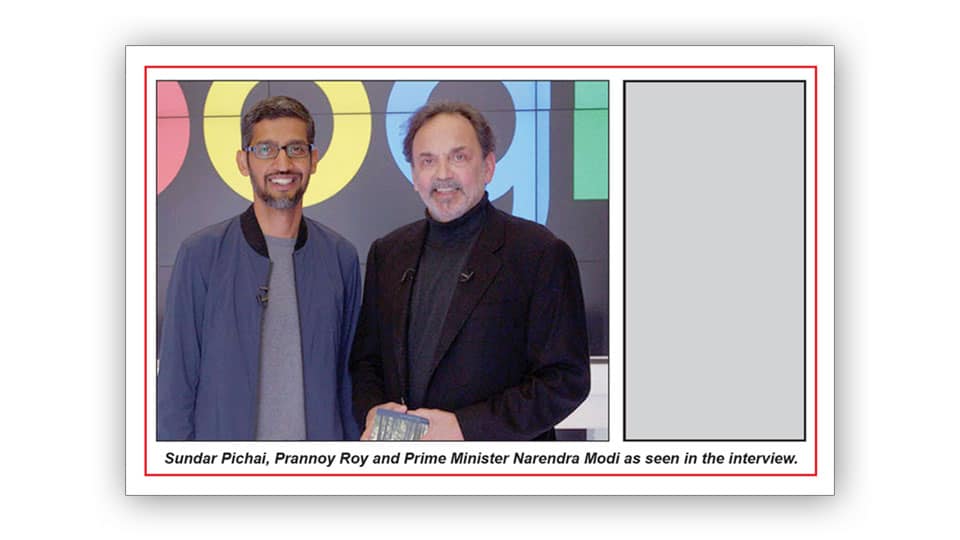 He said, Google had done some work on diabetic retinopathy, which is a cause for blindness but using AI machine we can detect it much better than humans can. If a tool like this is available, probably in the next 10 years, the Ophthalmologists, who are trained, can go to rural places in India, for example, and help diagnose the problem.

At one point, Prannoy Roy, probably in jest, says that the main causes for environmental degradation are human beings and the Artificial Intelligence machine or robot may decide that if human beings are creating a problem it is best to get rid of them!

According to Prannoy Roy, there was a massive study using AI on India and they are predicting a civil war in India during the next 5-10 years. Sundar Pichai was apparently surprised if not shocked  and asks: “Based on AI?”

But for Sundar Pichai scenarios of doom like this seemed rather imaginary.

Sundar Pichai shoots down such doomsday prophecy by left-of-centre political ideologues like Prannoy Roy saying, “I think we should worry about a lot of things, but scenarios like that seems far-fetched to me.” Period.

Now look at the reactions of Prannoy Roy to Sundar Pichai rubbishing such fears of a civil war in India.