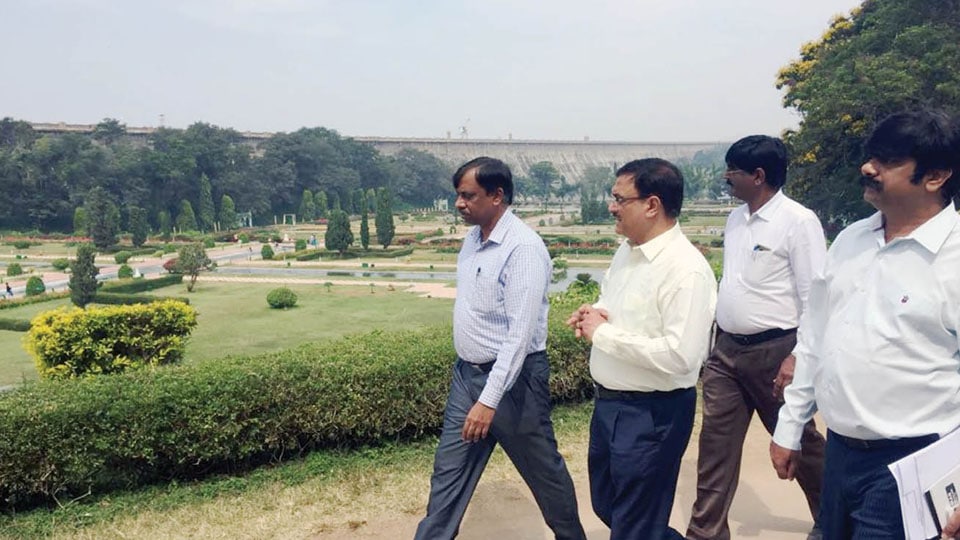 Mysuru:  The visit of Balasubramaniam, Chief Minister’s Financial Advisor to Krishna Raja Sagar (KRS) Dam on Nov. 12 has set in motion the State Government’s grand plans of building a Disney-land like Amusement Park at the vast environs of KRS.

The high-ranking officer, who takes a call on the State’s finance health, in consultation with Chief Minister H.D. Kumaraswamy who holds the Finance portfolio, visited the Dam on Nov. 12 and held discussions with officials regarding building the Disneyland.

The visit was a precursor to a high-level meeting that will be held in Bengaluru today to chalk out Disneyland plans. Chief Minister Kumaraswamy has already released Rs. 5 crore for the initial works of Disneyland project in his budget with a promise of more funds once the works start.

It may be recalled here that the previous Congress government had decided to beautify the KRS and Brindavan Gardens at an estimated cost of Rs. 1,300 crore and the Cauvery Neeravari Nigama Limited (CNNL) that manages the Dam had asked Jaipur-based Sincere Architects and Engineers Private Limited to prepare a Detailed Project Report (DPR) on the beautification.

The DPR was prepared and sent to the State Government for approval. This project is, however, shelved as of now as the JD(S)-Congress government has come up with the Disneyland project.

According to CNNL officials and government sources, the Disneyland-type amusement park will be built in an area of over 200 acres.

Of this, 69.82 acres is owned by Cauvery Neeravari Nigam Limited and 104 acres is under the control of Horticulture Department with the rest of the land owned by Karnataka Engineering Research Centre and Tourism Department.

Sources said that Balasubramaniam held a meeting with the officials regarding the memorandum of understanding to be signed among various departments regarding land transfer for the Disneyland so that future land tussle will be avoided. The officer, accompanied by CNNL Executive Engineer Basavarajegowda, CNNL Managing Director Prasanna, Superintending Engineer Ravindra Vasudev and Chief Engineer Prakash, visited the KRS campus and held discussion on the amusement park and beautification project.

On an average, over 10,000 tourists visit the KRS daily and the numbers see an increase during Dasara and peak tourism season. Once the Disneyland project is completed, the government is hoping to attract over 30,000 to 50,000 tourists per day.

Officials said that the Disneyland will come up at KRS depending on the area landscape. “We will build the amusement park based on the Dam elevation and accordingly, aesthetic features will be built,” officials said.

They added that a team of officers have already visited Disneyland in the United States of America and have procured videos, project reports and landscape designs. “We will customise the project to local needs while implementation,” officials said.

Today’s meeting in Bengaluru regarding the KRS beautification and Disneyland will be chaired by Water Secretary and the officer will hold meeting with CNNL authorities, sources added.