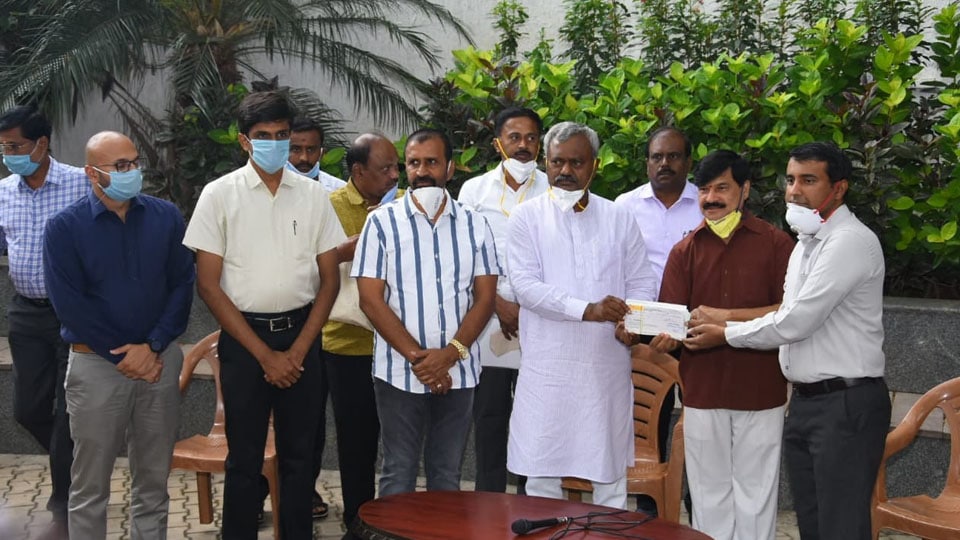 Mysore/Mysuru: District Minister S.T. Somashekar, who had assured the Mysuru Zoo authorities of mobilising funds for the maintenance of the Zoo during his visit last week, displayed his love for the animals and birds of Mysuru Zoo by handing over a total sum of Rs. 73.16 lakh to the Zoo authorities this morning which was donated by the people in his Constituency.

While Rs. 72.16 lakh was handed over through a cheque, Rs. 1 lakh was transferred through Real-Time Gross Settlement (RTGS).

Speaking on the occasion, the District Minister said that during his visit to the Zoo last week he had adopted elephant ‘Chamundi’ and he was informed that the Zoo was not getting revenue ever since the lockdown. He was told that the Mysuru Zoo requires Rs. 2 crore a month for the maintenance including salaries for the staff and food and fodder to the birds and animals housed in the Zoo.

To mobilise funds, the Minister had put up a message in the WhatsApp group of his Constituency, requesting people to adopt birds and animals at Mysuru Zoo by paying from Rs. 5,000 to Rs. 1.75 lakh. Minister Somashekar said that many people responded and a total sum of Rs. 73.16 lakh was collected and the same was handed over to the Mysuru Zoo authorities this morning.

The Minister said that he would be writing a letter to all MPs, MLAs and Ministers requesting them to donate generously for the maintenance of Mysuru Zoo and also urged animal-lovers to contribute for the same.

Mysuru Zoo Executive Director Ajit M. Kulkarni, who also spoke, said they were not taking any grants from the Government since 2002 and were maintaining the Zoo from its own revenue, through selling tickets, animal adoptions etc. He said that they had not expected such a huge amount would be donated in such a short time.

Jubilant Company: District Minister Somashekar said that Nanjangud MLA Harshavardhan has demanded a probe on how the virus entered the company and added that though it is very tough to find out the source of the virus, IAS Officer Harsha Gupta has been asked to investigate.

Factory employees denied salaries: Somashekar said that many employees working in various factories in and around Mysuru had told him that they had not been paid salaries and were facing difficulties and added that he has urged the Labour Minister to look into it.

He further said that the Labour Minister would be visiting various factories in about three days’ time and hold discussions with the management of the factories and take necessary action.