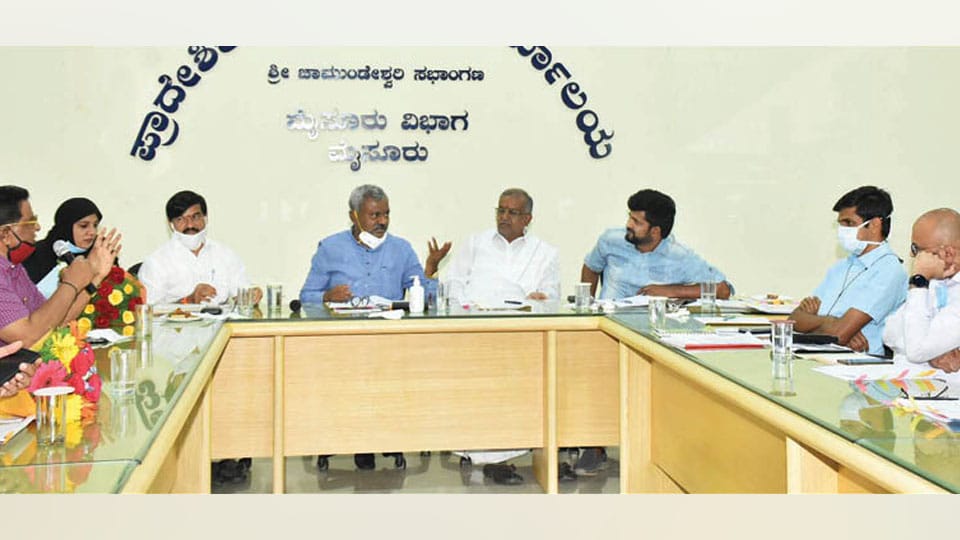 Mysore/Mysuru: District Minister S.T. Somashekar held a progress review meeting of the projects and schemes undertaken in the city under the Centre’s Mahatma Gandhi Nagara Vikasa Yojana (MGNVY), at the Regional Commissioner’s office here on Wednesday.

Soon after the meeting began, MCC Commissioner Gurudatta Hegde apprised the Minister that the Centre released Rs.150 crore under MGNVY in Aug.2019 for taking up various developmental works in the city for a four year period from 2019 to 2023.

However, out of the Rs.150 crore, the MCC paid a little over Rs.50 crore to the Centre as State dues in respect of JnNURM projects, leaving the MCC with Rs.99.24 crore, out of which 10 percent will be reserved for cost escalation of projects, 5 percent for payment of honorarium in other schemes and one percent for administrative expenses, which further leaves the MCC with just Rs.83.36 crore. Out of this amount, the MCC will spend 24 percent for SC/ST development schemes, 5 percent on road and traffic improvement, which leaves the MCC with a final balance of Rs.59.10 crore, out of which other developmental works are to be taken up, Hegde said.

Mayor Tasneem wanted the available funds to be distributed equally among all the 65 Wards of the MCC without any discrimination.

MP Pratap Simha suggested giving priority for uninterrupted drinking water supply and scientific collection, segregation and disposal of wastes across all the four Assembly segments of the city.

Chamaraja MLA L. Nagendra demanded a probe into JUSCO’s lapses in the execution of 24×7 drinking water supply project. He also wanted further upgradation of K.R. Hospital and expedition of all ongoing developmental projects in the city, which he said were getting unduly delayed.

Chamundeshwari MLA G.T. Devegowda urged the MCC to improve infrastructure and provide better civic amenities in MUDA and MCC layouts, as many layouts coming under his Assembly segment were facing severe problems whenever it rains heavily.

District Minister S.T. Somashekar suggested the people’s representatives and the authorities to discuss in detail all issues to be taken up on priority and come up with an action plan, which can be finalised in the next meeting.