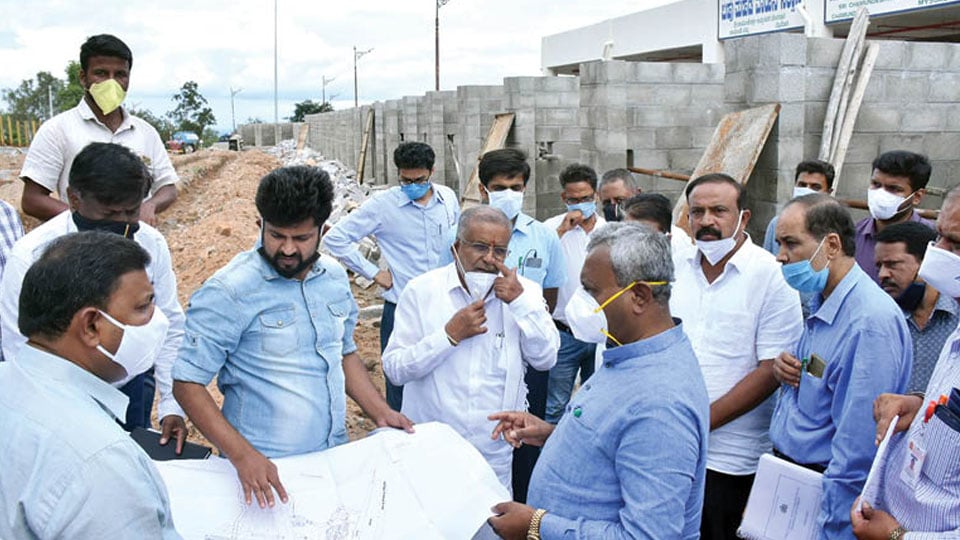 Mysore/Mysuru: The stalled works of constructing shopping outlets due to paucity of funds atop Chamundi Hill will begin soon and funds will be infused into the project, said Mysuru District Minister S.T. Somashekar. He was addressing officers and media atop the Hill last evening where he had been to inspect pending works.

During the Minister’s visit, one of the officers accompanying the team told Somashekar that the works had been stopped as there were no funds. The Minister was presented the project blueprint and was told that shopping outlets were constructed on the side of the road leading to the Chamundeshwari Temple but they obstructed the smooth movement of people to the Temple. The outlets were later shifted to multi-level parking lot.

Responding to lack of funds, Minister Somashekar said that he would try and get funds to construct the shopping outlets. The Minister felt that in the interest of overall development of the Chamundi Hill, works should not stop. He directed the officials to speed up the works as soon as they receive funds.

MP Pratap Simha briefed the Minister and said that to bring in a systematic development and to regularise the haphazard shopping outlets atop the Hill, 197 outlets were being constructed. Of them, 137 are meant for shopping, 25 sections for food court and 36 outlet spaces have been earmarked for toilets, the MP said.

The Minster said that he will get the Rs. 4.50 crore proposal that has been handed over to the Muzrai Department sanctioned so that devotees are not inconvenienced especially during auspicious occasions like the ongoing Ashada month.