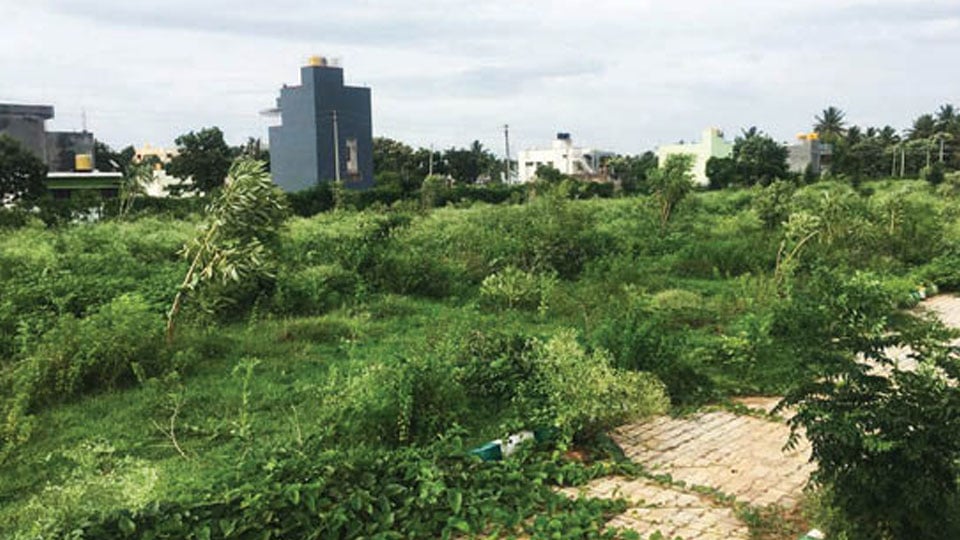 Mysore/Mysuru: There is no peace of mind for residents though they have spent lakhs of rupees on purchasing sites developed by Mysuru Urban Development Authority (MUDA) at Vasanthanagar on Bannur Road here.

Though eight years have passed since the formation of Vasanthanagar, the residents are still facing water problems, Underground Drainage (UGD) system, bad roads and undeveloped parks among other issues.

The MUDA, in 2005, invited applications from the public and distributed more than 2,000 sites measuring 20×30, 30×40 and other dimensions at Vasanthanagar. There are hundreds of people residing in more than 300 houses built in the area, who are still denied of basic facilities. Though representations were made to the MUDA officials since eight years, their pleas have fallen on deaf ears.

Drinking water is a major problem

Speaking to Star of Mysore, Vasanthanagar (MUDA) Residents Welfare Association President N.T. Vasudevaiah said that though MUDA had sunk borewells to provide water to the area, the borewells have become useless and due to sub-standard pipeline works, pipes are broken at many places. Despite drinking water being supplied through tankers, it is not sufficient and sometimes the tankers do not arrive, he said.

Vasudevaiah alleged that sub-standard development works were taken up at Vasanthanagar and added that the sewage generated from 300 houses is not flowing smoothly in the Underground Drainage (UGD) system resulting in the UGD getting blocked and sewage water overflowing from manholes and flowing on the so-called roads in the locality. What would happen if more houses come up in the area, he asked.

Continuing, he said that the UGD lines were laid just for namesake and sewage water is not flowing in the drains.

Vasanthanagar has parks at two places which are a bit developed but not maintained resulting in overgrowth of weeds and bushes. This has resulted in a few people partying in the parks by consuming alcohol and creating nuisance. The parks have also become a place for thieves to hide and the residents are forced to close doors of their houses and remain indoors, he said.

Except for important roads, almost all the roads have to be asphalted. It is worse during rains as one cannot travel on these pothole-filled roads without falling and getting injured. A small rain makes water to get stagnant in front of houses as almost all storm water drains are blocked due to growth of weeds.

Vasudevaiah said that there are problems with the supply of power to the area and most of the roads lack street lights. He said, though it has been five years since the houses were constructed, one or the other problem surfaces daily and added that whenever he goes towards MUDA Office side, he never forgets to give a petition to the officials with a request to set right the problems faced by the residents.

Vasudevaiah said that his house is the third building in Vasanthanagar and he pays Rs. 5,600 as Property Tax every year. The interest shown by the officials while receiving taxes is not the same when it comes to providing basic facilities, Vasudevaiah said and added that there is no water in the borewells and though transformers are installed at various places, they are not connected. Every work is incomplete in the area, he rued.

MUDA Commissioner D.B. Natesh admitted that there is a problem in the supply of drinking water at Vasanthanagar and the area residents have been complaining about it frequently. A survey pertaining to the problems faced by the residents of Vasanthanagar would be taken up to solve them soon after holding discussions with the officials, he added.