In a novel move, the Mysuru District Police have taken up the responsibility of spreading awareness about Government schemes for the upliftment of the weaker sections of the society, Constitutional laws, important contacts through    tiny handbooks.

In all, the Police have printed five such handbooks which will be distributed free of cost to the public, schools and colleges and to Policemen.

Speaking to reporters at the recently held ‘Janaspandana’ programme in Mysuru, Superintendent of Police Ravi D. Channannavar had said that the telephone directory will contain e-mail address and telephone numbers of people representatives from village level to the national level, office of the President of India, the Prime Minister’s Office and senior officials. 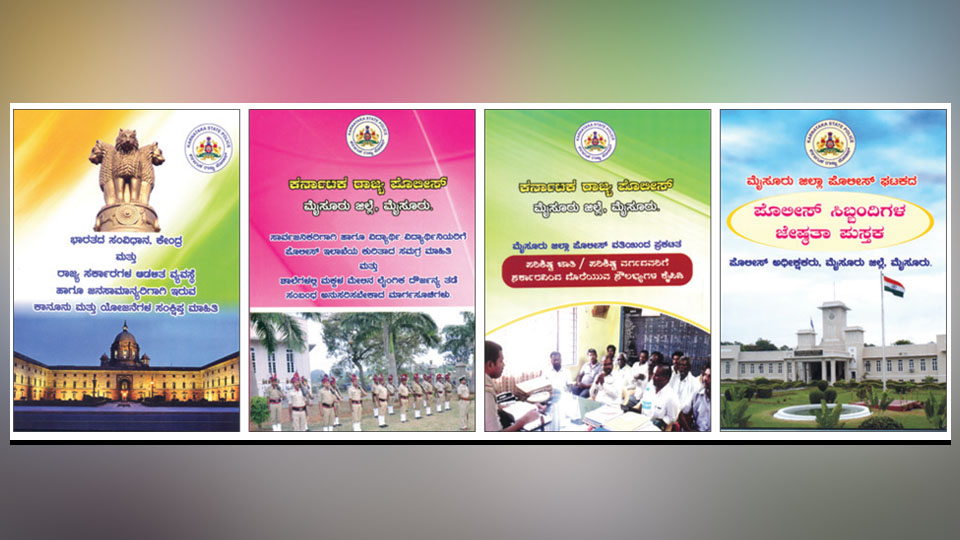 The SP had said that apart from this directory, the district Police are also planning to bring out handbooks containing vital information on general laws, Government programmes, benefits to SC/ST communities announced by the Central and State Governments, Indian Constitution, rights and duties of an individual etc., and also on district Police.

The directory and handbooks have been printed in Kannada and will be distributed free of cost to every Gram Panchayat, Government school and public libraries and as well to Nirmiti Kendras and NGOs.

Speaking to Star of Mysore, SP Ravi D. Channannavar said that among the handbooks is a Police service manual that gives a Police Constable or an Officer an insight into their service, perks and promotion periods. It also lists out the Police Department’s day-to-day functioning, duties and powers of different Police officials, and other such information. “A higher level officer will know when his promotion is due and the facilities the Government is providing. But a lower-rung officer or the constabulary will not be aware of such details. Our intention is to make them aware,” he said.

A section in the booklet also contains guidelines for child safety to be followed by schools and teachers, besides the rules outlined under Protection of Children from Sexual Offences (POCSO) Act, 2012, he added.

“Already we have printed over 10,000 handbooks and they are being given free of cost across the district. The response from the receivers is good as they now access to all basic information. The descriptions that are given in the handbook are easy to understand and give a direction to the information seeker. He/ she can always seek more information from other sources once basic information is acquired,” the SP added.

The handbooks have been printed under the funds that have been sanctioned for Crime Prevention Month. “The telephone directory is exhaustive and has contact details and phone numbers of government officials of different departments at both the district and State levels. We will give the directories to all 1,693 villages of Mysuru district. One directory each will be kept in the village school, library, and an NGO apart from the Police Stations,” he added.

When asked about the motivation behind this initiative, Channannavar said that as the Superintendent of Police in Shivamogga, he used to attend Karnataka Development Programme (KDP) meetings where officers did not even have basic information about government schemes. “Even I realised that there were several government schemes and programmes I was not aware of. That’s when I got the idea of such handbooks and we went ahead with the project in Shivamogga. The same experiment has been replicated in Mysuru,” he added.

Even otherwise, such directories and information booklets will help Police Department in day-to-day activities. “If a person comes to a Police Station with an issue that concerns another department, he can be given the telephone numbers of that Department. This will enable us to be a bridge to other departments,” he said.