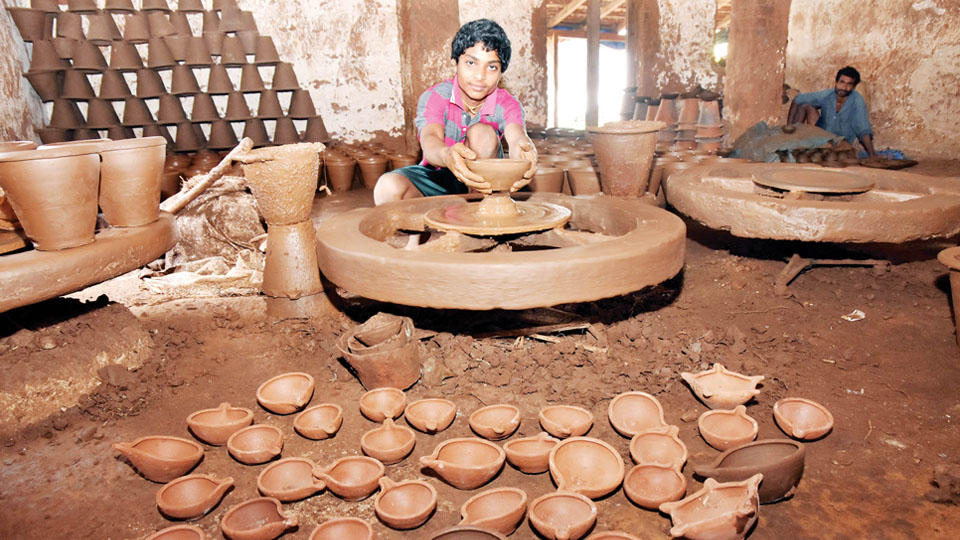 Looking for the origin of earthen lamps or Diyas for Deepavali, Star of Mysore, on a rainy day, arrived at Doora, a village located 20 kms to the South of Mysuru. At Doora, we were standing right in the middle of a sea of clay pots and Diyas. This village is keeping the tradition of Diya-making alive where potters balance their lives amidst lack of business, daily livelihood requirements and competition from fancy lamps.

Looking at these potters, it is clear that the art of making the traditional clay lamps is going far away (Doora in Kannada means far away) or vanishing from Mysuru which was once known for its Diyas (Deepa in Kannada).

This Weekend Star Supplement tells the story of Doorada Deepa (the lamp that has gone too far). Take a look.

As Deepavali, the festival of lights approaches, mounds of earthen lamps piled up in baskets are growing outside shops in Mysuru. They are in direct competition with shops selling electric goods — the long line of multi-coloured China-made fairy lights dangle and wink at the traditional clay lamps. They seem to be winning too as customers buy boxes of these lights while the ubiquitous symbol of Deepavali, the humble diya, is not even being bought in dozens.

Diya or earthen lamps form the basis of the celebrations from Oct. 27 to 29. They have been used from time immemorial for festivals and formal religious events. From a simple style, it has evolved into a more artistic form. From the simple small diyas to the big fancy ones, each of them is viable for a place at our homes. For any Hindu celebration, the earthen lamp is a symbol of tradition and beauty.

Gone are those days when traditional clay lamps were in great demand. The invasion of e-Commerce and China-made lamps has not only affected traders of different merchandise but has also thrown out diya-makers out of business.

The Kumbara community (potters), who have been an integral part of Mysuru’s culture since many decades are now fighting for their existence. The businesses they had setup is slowly vanishing with majority of buyers today going the e-Commerce way to purchase the items of their choice.

However, some families have made a bold decision to continue with their family legacy of making traditional lamps especially for Deepavali. Over 14 Kumbara families in Doora village of Mysuru taluk have come together to form an association called Kumbara Kushala Kaigarika Sangha through which they are supporting each other to make a living out of pottery. Two to four members from each family join together every day and start preparing to make lamps, pots and other clay items.

Speaking to Star of Mysore, Govindaraju, a traditional diya-maker at Doora village, said earlier they used to make traditional lamps numbering in lakhs as they were in great demand and sales used to gain feverish pitch as Deepavali approaches. But, today they only make lamps based on pre-orders.

Govindaraju sells the lamps at Re.1 to shops in Mysuru, Nanjangud and Gundlupet where they are in much demand. “Deepavali diyas do not give us much profit. Today, there are factories in Bengaluru and Tamil Nadu that manufacture traditional lamps using machines and supply them to wholesale dealers and retailers throughout the State. Though people want to purchase traditional lamps hand-made by us, they are forced to buy the ones available in malls and retail shops as traditional lamps are not manufactured in large quantities,” he added.

The original traditional lamps, prepared by Govindaraju and his friends have special quality. Once they are prepared, the lamps are baked in certain degrees inside a specially designed clay kiln. Lamps and pots are baked for 10 hours using dried coconut fronds and are removed from the kiln after three days. Later, they are segregated.

“Once they are removed, each lamp is tested by potters by tapping on them to see if they are well-baked and hard. The fully baked lamps and pots are identified based on the sound that comes out of each lamp. A well-baked lamp or pot makes a sound similar to a copper vessel which is not in case of diyas manufactured in factories,” claims Govindaraju.

Fancy decorative items and diyas available online have hit traditional lamp market. Many of the potters have stopped making diyas as it is not a lucrative business anymore.

Kumbarageri, an area populated with Kumbara community in Mysuru city, has stopped making lamps as there are no facilities available.

The potters in the area are active only during Ganesha Festival during which they prepare idols of Lord Ganesha, using moulds. But the same cannot be done in case of diyas as they are too small in size and needs to be baked after it is prepared.

Though clay diyas have made way for LED lights, battery-operated diyas and similar products, we can still find traditional lamps lit at temples that have continued to follow our culture and tradition. Traditional lamps continue to be lit at the corners of main entrance of every Hindu house and Tulasi plant, during Karthika month of Hindu calendar, which is considered auspicious.

To make the diyas attractive, potters have started painting and colouring them in bright hues. They said in the last two decades, their business has dropped by 60 per cent. The potters added that the tradition of making clay diyas will soon vanish if the Government does not come forward to help them.