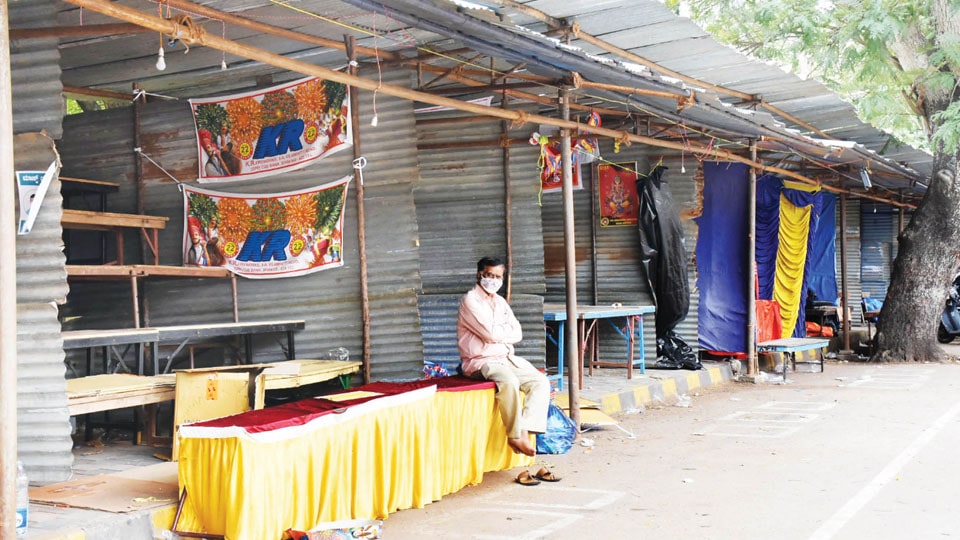 Mysore/Mysuru: It may be a festival of lights for some but it is definitely a dark Deepavali for a majority of traders who could not sell a single cracker following the order from Karnataka High Court to sell only green crackers.

Over two dozen cracker stalls across the city had been shut as it failed to comply with the HC order and the guidelines issued by the State Government in the wake of COVID-19 pandemic. Hardly two to three stalls were selling crackers in the sprawling J.K. Grounds of the total 12 shops and all ten shops in Chamundipuram had been shut since they had only conventional crackers.

The shops, which had only green crackers were the lucky ones as they faced no problems from either Police or Karnataka State Pollution Control Board (KSPCB) officials. Some shops in Udayagiri, Bandanthamma Temple, Hebbal, Ramakrishnanagar and other places were found doing business.

The joint inspection by Police and KSPCB officers went till late evening and only after checking the stock, traders were allowed to sell the crackers to citizens. Without showing any leniency, firecrackers sans QR codes, details of manufacturer, trade licence number and green stickers, were totally removed from the shops.

Sellers were asked to take out conventional crackers from the shops failing which it would be confiscated.  Fearing legal action, traders shifted non-green crackers elsewhere and sold only the crackers having all specifications.

60% business hit: A few traders told SOM that nearly 60 percent of cracker business was hit due to confusion between green crackers and conventional crackers. The entire stock of conventional crackers has been shifted to various godowns in city and are pinning hopes that manufacturers will take back the stock and return their money.

All this happened due to last minute decision of the State Govt., that too by CM B.S. Yediyurappa, who first announced the ban on sale and lighting of crackers and later revised the order stating that only green crackers will be allowed without realising the difficulties in procuring them in last minute. The traders said they would have been very careful and purchased only green crackers had the Government taken this decision at least two to three months in advance. “Now who will compensate for our losses?” they questioned.

No bombs: With COVID-19, citizens too were buying only small crackers like flower pots, sparklers (sursur batti) and have stopped bursting cracker bombs. This has reduced sound pollution to a great extent, opined KSPCB Scientific Officer N. Kavitha.

She told SOM that DCP Dr. A.N. Prakash Gowda has authorised jurisdictional Police Inspectors to conduct surprise raids on cracker shops in  case they get information or have doubt that traders were selling conventional crackers. This has disciplined many shopkeepers and were selling only green crackers, she added.

Pataki Cheeti: Lucky ones are those who pay some money as Pataki Cheeti and get a big packet of crackers directly from Sivakasi traders well in advance. Those green or conventional crackers have been distributed to all members already and it would be difficult to identify and seize those cracker boxes.

Traders at J.K. Grounds, who had already paid rent to MCC, had borrowed green crackers from their fellow traders to make enough money to recover their rent and other expenses.