Home » Feature Articles » Karanji Lake to spring back to Life 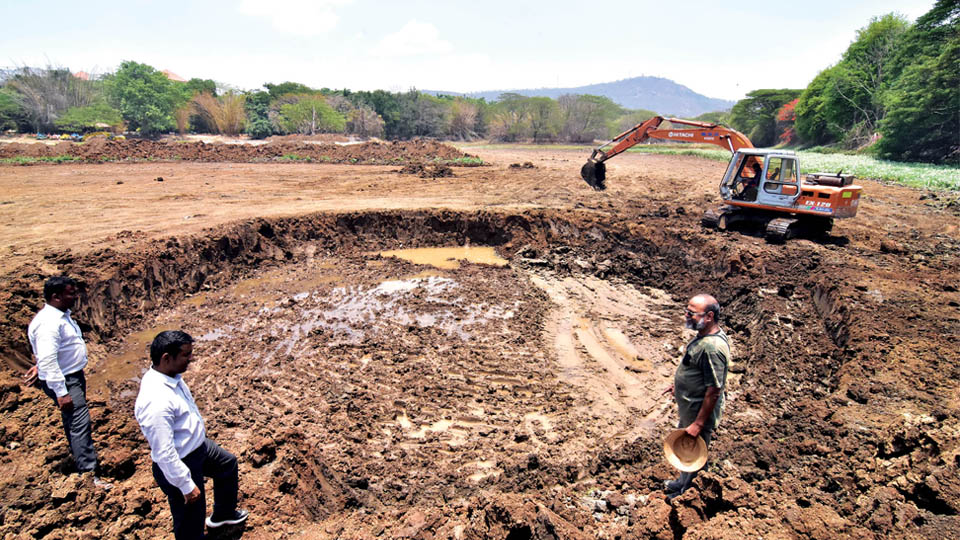 Karanji Lake to spring back to Life

Come rains, the Karanji Lake, maintained by Sri Chamarajendra Zoological Gardens or Mysuru Zoo that is loved by Mysureans will regain its pristine beauty and will be full of water that will in turn support a rich and rare biodiversity.

As it is the iconic Lake, now drying, is a good example of wetland ecosystem and is a home to many local and migratory birds. Such rich ecosystem will get a further boost in coming days as the Lake is being desilted in a scientific manner without causing any damage to the environment. Karanji Lake per se is 30 to 35 acres and including its outer boundaries and green landscape, it measures 79 acres.

Desilting of the Lake is progressing in full swing and once it starts raining, the Lake will bounce back to life with more water, more greenery and a repository of plant, bird, fish, and insect and reptile species.

The desilting has been necessitated as the Lake is rapidly going dry and the drying process this year began even before the onset of summer. The Zoo Authority that manages the Lake had stopped boating activity from Feb. 8 due to lack of rains, drop in water level and lack of natural flow of water from the Chamundi Hill.

The Zoo Management is taking the guidance of naturalist U.N. Ravikumar who is also a wetland specialist to desilt the lake and desilting works are being taken up in two islands. While regular desilting leaves the earth gaping, the Lake is being desilted in such a way that the wetland is retained and only the central part is dug up. This process is called ‘drawdown method’ where water is retained at the centre and also at the sides.

Speaking to Star of Mysore, U.N. Ravikumar, who was personally monitoring the silt removal work, said that it was not just a physical silt removal. “While desilting, we are taking care of the biodiversity too. We are leaving out the Lake bund where reptiles and other living organisms including fish have taken shelter due to intense heat. We are only removing the old layers that have been accumulated over the years,” he said.

He said that the one metre of the desilted area is filled with clay (Jedi Mannu) that has been accumulated since 1986, below that there is soil that flowed into the lake from layout construction in surrounding areas since 1980s and 90s and the top layer is the sewage deposits that have flown into the lake from surrounding areas since the last 20 years.

“We are making sure that a spongy surface is created inside the Lake that can hold water once it starts raining. This process ensures that the water holding capacity is increased to the maximum. The areas are deepened and the islands are formed retaining the soil. Once water starts filling up, the islands will attain the natural shape. Already when desilting, we can see water emerging out in the form of springs,” he said.

Once the process is complete, there will be enough water even for boating. The presence of water will naturally attract birds and the Lake will spring back to life once again, he said and added that the desilting work is a part of conservation efforts.

Zoo Executive Director Ajit M. Kulkarni said that the decision of desilting was taken in February when the Karanji Lake Technical Committee met. “As per the bare minimum available records, desilting was done over 40 years ago and the boating point was desilted 15 years ago,” he said.

“We do not want just a tank to hold water and we are aiming to have an active lake that supports a rich flora and fauna. Desilting works are being carried out keeping in mind the existing diversity and also the new diversity that will emerge once the rain starts,” he said.

The desilting work will ensure more water is stored in the Lake and through this, the now depleting groundwater level will be recharged. Water will percolate to neighbouring wells and borewells, he added. “It will be a gift of nature for future generation,” Kulkarni said.